Predicting market movements with chart patterns is one of the most effective tools for making trade decisions. Chart patterns are pure price-action and the basis of underlying buying and selling pressure.

They are formed by support and resistance levels, as well as by more complex versions of trend lines.

Patterns have a proven track record, and day traders rely on them to identify reversal or continuation signals, to open positions, and to identify price targets. Traders also look out for patterns to help them know if the odds are in their favor.

If you’ve studied harmonic patterns, then you are probably familiar with the more common types of patterns such as Butterfly, Gartley, Bat, Cypher, and Crab patterns.

However, there is also a slightly less known, but equally effective harmonic pattern called the Wolfe Wave pattern.

The Wolfe Wave is composed of five-wave patterns in price that imply an underlying equilibrium price. Keep reading to find out more about the Wolfe Wave pattern, why it forms, and what it means.

What is the Wolfe Wave Pattern?

The Wolfe Wave is a pattern consisting of five waves showing supply and demand and a fight towards an equilibrium price. Wolfe Wave patterns were introduced an S&P500 index trader known as Bill Wolfe.

Wolfe described the strategy that will be described below and developed the indicator that goes by the same name, used in trading this strategy.

Wolfe Waves work a bit like the Elliot waves.

For example, they get the 1-2-3-4-5 wave formations seen with Elliot waves and put them into a shape context that traders can trade as bullish or bearish. However, there are some differences in both waves.

Wolfe Wave patterns can develop over short- and long-term time frames such as minutes or weeks. They are used by traders to predict where a price is heading and when it will get there.

Why it Forms and What it Means

According to Bill Wolfe, the Wolfe Wave is a naturally occurring harmonic pattern that can be found in all financial charts, all of the time.

Bill Wolfe would be against the use of other indicators, as he suggests that the Wolfe Wave stands alone in its methodology.

As mentioned earlier, the pattern can indicate either bullish or bearish trends as shown in the charts below.

For a Wolfe Wave pattern to form;

What to Look for when Trading the Wolfe Wave Pattern

Like with any other trading pattern, the Wolfe Wave pattern has a couple of things that traders ought to keep an eye on when using it.

The chart below will let you know what to put into consideration when using the Wolfe Wave. 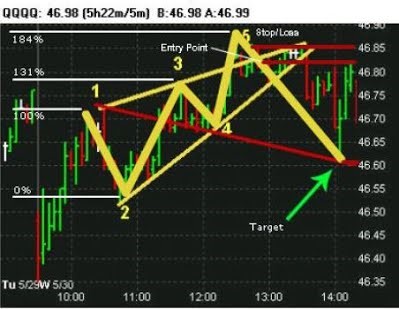 Both the bullish and bearish Wolfe Wave are traded the same ways.

In the example above, you will notice point 5 overshoots resistance in the bearish Wolfe Wave. When wave 5 overshoots support or resistance, this is known as a false price breakout.

The breakout line shows you the best place to enter the trade.

Like many other trading patterns, the Wolfe Wave can be extremely effective if correctly exploited. Just remember that the key to using this pattern for profitable trades is its correct and timely identification.

Traders who use this pattern time their trades based upon the resistance and support lines indicated by the pattern.