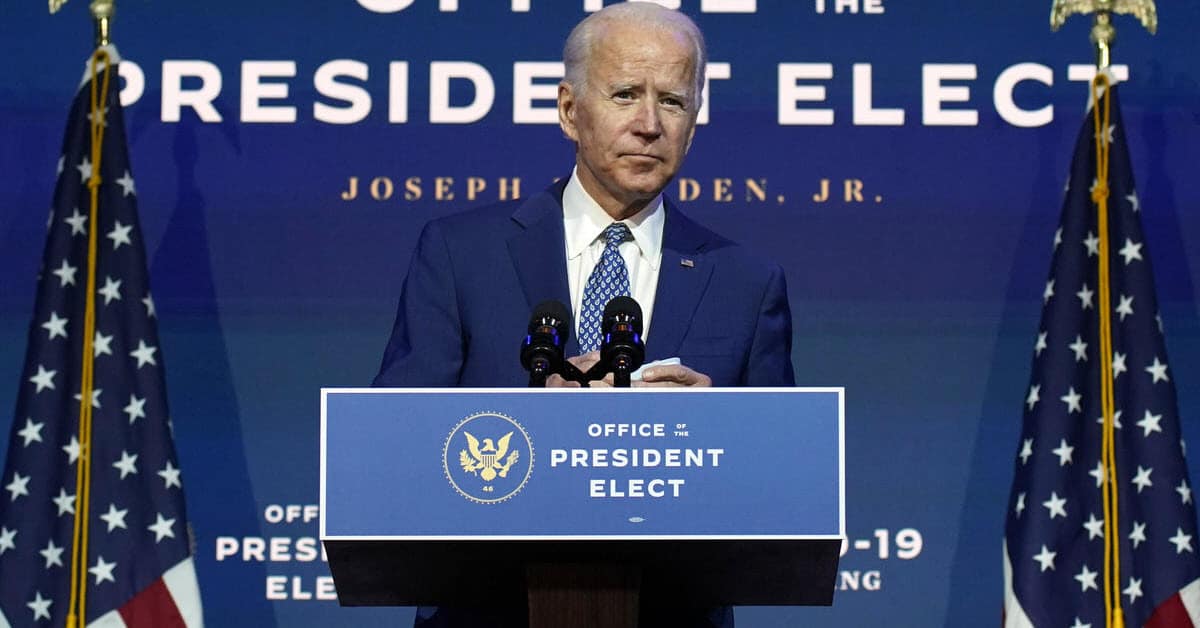 Now that Joe Biden has been officially named president of the United States by the Associated Press, as mandated by the Constitution, let’s take a look at what we might expect from the presumed 46th president and the kind of economy he will inherit – and what he plans to do with it.

Thanks largely to his predecessor, Biden starts off with an inherently strong economy, even as it continues to heal and deal with Covid-19. Assuming that Biden doesn’t follow his own comments and some of his advisors about imposing another lockdown, we can probably expect that the economy will eventually get back to the 2-3% annual growth rate we enjoyed before the pandemic.

Biden will also likely benefit from the recently announced introduction of a Covid-19 vaccine, although a lot needs to be done first, like manufacturing and then distributing hundreds of millions of doses worldwide, which will take some time. But assuming the vaccine is as efficacious as Pfizer says it is, that will be a further elixir for economic growth.

It’s hard to imagine a Federal Reserve friendlier to the financial markets than the current one, so Biden will benefit from that as well. Biden is also not likely to be a thorn in Jerome Powell’s side as much as the current White House occupant.

Speaking of the Fed, Biden may have the opportunity to quickly put his stamp on the Fed – or maybe not. Depending on how things play out over the next few weeks, Biden may be able to nominate as many as three new Fed members – or none at all.

Trump nominees Judy Shelton and Christopher Waller have yet to be confirmed by the Senate, but last week Senate Majority Leader Mitch McConnell said he was going forward with the Shelton nomination, implying that he’s confident he has the votes to confirm her; a vote could come this week. Waller’s vote has not yet been set, but his confirmation doesn’t appear to have any issues.

Learn how to use options to supersize your portfolio returns with Trader Travis’ free training!

Should both of them be confirmed before Biden takes office, he might have only one seat to fill early on. Fed governor Lael Brainard, the only Democrat currently on the Fed, has been mentioned as his Treasury Secretary. If that happens, he would be able to nominate her replacement. If she remains at the Fed, he would have no new seats to fill until next October, when Randal Quarles’s term as Vice Chair for Supervision ends.

So can Biden screw this up? Of course, and he seems to be trying already, based on the company he keeps.

The president-elect wants to raise corporate taxes to 28% and hike taxes on U.S. households making over $400,000. Raising taxes usually isn’t a smart thing to do in a recession, but the odds seem pretty good that he’ll try to please the so-called progressives who seem to be at the forefront of shaping his economic team.

According to the New York Times, the 500 people on Biden’s “agency review teams” – sort of a pre-transition committee – are heavily slanted towards academics, Obama-era staffers, and left-wing think tank people. By contrast, “well-known corporate and Wall Street figures are few” in number. This roster reflects the “values and priorities of the incoming administration,” the transition team says. Uh oh.

So don’t expect a Biden administration to be particularly friendly to banks, even though that wasn’t always the case during his long tenure as the “senator from MBNA,” when he championed making it more difficult for consumers to file for bankruptcy to avoid paying back their credit card debt. He’s since done a 180 on that to get the Democrat nomination.

But there are some things to like, such as his likelihood to put some teeth back in the Consumer Financial Protection Bureau. He’ll probably waste no time replacing Kathleen Kraninger as the agency’s director now that the Supreme Court has ruled that the president has the power to replace the director without cause. Possible candidates to replace her include Richard Cordray, the CFPB’s first director, and Rep. Katie Porter, D-Calif., a fierce bank critic and a former law school student of Sen. Elizabeth Warren, the agency’s creator. Leandra English, Cordray’s short-lived successor as CFPB director who was promptly sacked by Trump, is on Biden’s agency review team.

Biden also is opposed to the Trump administration’s plan to “recap and release” Fannie Mae and Freddie Mac, the twin mortgage agencies that have been under government conservatorship since they failed during the 2008 financial crisis. Biden would simply leave them as they are, which seems like a sensible idea, considering that they continue to buy most of the residential mortgages consumers depend on, and at a handsome profit, too, most of which goes to the Treasury.

So it’s a mixed bag. Here’s hoping for at least four more years of continued prosperity.