There is a new buzzword: meme stocks.

Recently, some stocks have captured the attention of Wall Street, regulators and Congressional lawmakers, as a band of amateur traders on Reddit forum WallStreetBets teamed up in an effort to squeeze big-money short sellers.

For example, we recently saw shares of GameStop (NYSE: GME) – a struggling video game retailer chain – experience wild volatility as members of the subreddit ganged up against hedge funds holding short positions in the stock.

Backlash against professional short sellers such as Melvin Capital and Citron Research has been a key rallying point for traders using the forum to discuss their trades. Short sellers have long been labeled as unethical since they profit when most people are losing money (i.e., when stock prices drop).

So, what exactly is a meme stock? And why have traders been lining up to jump on the trend?

What Is A Meme Stock?

“Meme stock” is a slang used in trading world to refer to stocks with heavy-short interest that can be artificially manipulated to prove a point.

Such stocks are often mentioned often in trading-related posts on social media platforms, online discussion forums and news articles. They are popular among younger traders, volatile, and their value is based on potential instead of financial status.

Generally, these stocks are overpriced, all because of market speculation, resulting in huge changes in their valuations and peaks of rapid moves within a short period of time.

However, this is not to say that meme stocks are bad stocks.

As a matter of fact, most of them have good fundamentals but sometimes they are overvalued and some traders tend to panic sell when it drops and have a fear-of-missing-out when the stock rises.

How Meme Stocks Came To Popularity

GameStop, AMC Entertainment Holdings (NYSE: AMC), Koss (NASDAQ: KOSS) are some of the most popular meme stocks, simply because their prices soared outrageously.

But they followed Kodak (NYSE: KODK) and Hertz (OTCMKTS: HTZGQ), which, despite having struggling businesses, saw their stock prices surge when they became Reddit darlings in 2020.

For instance, the chart below is GameStop after it skyrocketed higher due to a gamma squeeze from reddit traders: 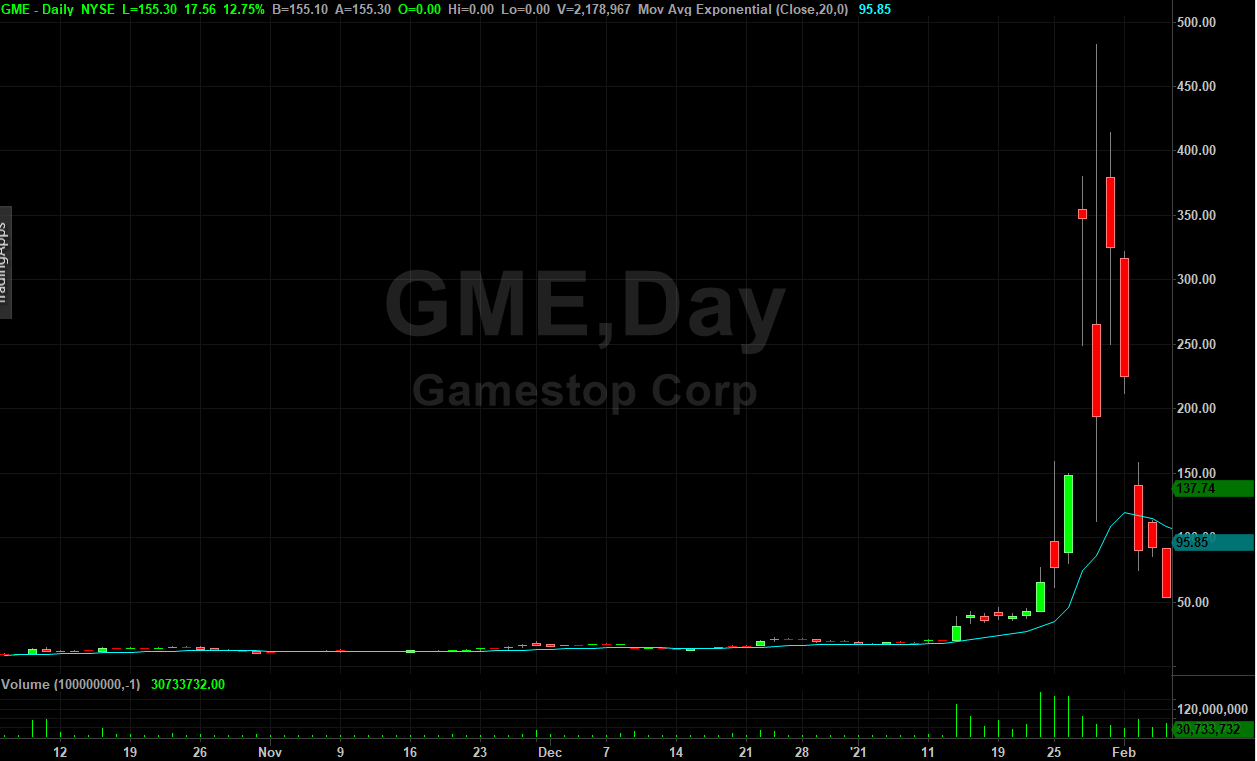 However, the meme stock trading mania accelerated in January this year when traders poured money into stocks such as GameStop. It all started as an internet meme by a handful of pranksters on the WallStreetBets forum, and turned into something far bigger than anyone could have imagined.

This is how the drama unfolded: Shares in Gamestop, or “Gamestonk”  as it was dubbed by many traders on social media sites, were trading as low as $17 in mid-January.

A number of traders on Reddit were infuriated at the fact that more than 100% of GameStop shares available for trading had been borrowed by hedge funds to bet against the stock. They therefore decided to buy stock in a concerted effort to oppose the hedge funds.

This became a massive trend that saw millions of traders including many outside of Reddit show up in record numbers to try to cash in on GameStop volatility.

Traders on WallStreetBets and other social media platforms exhorted others to pile in as the GameStop rally gathered steam.

Some posted comments such as “GME to the moon”, “Let’s keep fighting”, “Rise of the planet of the ape: GME edition”, “Hold the line with hands of diamond”, the latter urging others to hold their shares and not panic sell.

By February, the stock was trading as high as $483, and at one point GameStop hit a valuation of $44 billion despite being a loss-making company.

As a result of extreme volatility, online brokers such as Robinhood started to restrict the trading of Gamestop, a move that angered traders and attracted the attention of lawmakers in Washington.

Robinhood later lifted restrictions on the trading of Gamestop and another Reddit fueled short squeeze sent the shares soaring back up to as high as $170.

The massive rally in shares of the struggling retailer later dwindled. Of the most well-known meme stocks targeted by the traders, most had given away their gains by Feb. 3. As of writing, Gamestop shares are trading at $132.

According to financial analytics firm Ortex, hedge funds who had taken out “short” bets in GameStop lost a total $12.5 billion over January.

The epic short squeeze between the crowd of retail traders on Reddit and the giant hedge funds that had heavily shorted faltering stocks and was a landmark moment for many traders.

Experts say that the key to trading meme stocks, of course, is knowing how to take advantage of the system. Sometimes the conditions are so ripe for a stock to rocket higher that it can surge far past anyone’s imagination.

However, traders also need to perform technical analysis to know when the top arrives. Moreover, remember to buy low and sell high.

Some of the traders made a lot of money in the early days of the meme stock trading frenzy.

In January, for example, shares of GameStop rocketed nearly 2,300% and reached an eye-watering high of $483 a share at the peak of the frenzy.

But others lured by the promise of a gold rush expressed deep regret, posting screenshots from their online brokerages and banks to the WallStreetsBets forum that, in some cases, showed hundreds of thousands of dollars disappearing in a matter of hours.

Since successfully lifting the share price of GameStop and other popular meme stocks, Redditors seem so far unable to organize another short squeeze.

Some brokers and regulators have cautioned that meme stocks carry risks, particularly for latecomers looking to chase easy gains.

The meme stock craze has forced hedge funds and money managers to start paying much more attention to what smaller traders are doing, as they discuss their trades on social media sites and pitch ideas for stocks to target.

Overall, the advice for traders looking to trade meme stocks remains the same, experts say: know how to take advantage of the system.