It was recently announced that Tesla would be added to the S&P 500 index before the open on December 21, 2020, ending years of speculation by Tesla fans and critics about the S&P index committee’s hesitation to include the controversial automaker.

The inclusion would make Tesla, sitting at a $594 billion market cap, one of the index’s ten largest components, sitting between Berkshire Hathaway (BRK.B) and Facebook (FB).

Fans of Tesla are excited about this development, but most of them are left asking why it took Standard & Poor’s so long to include the company in their index.

After all, the average market cap of an S&P 500 component is roughly $69 billion. Tesla reached that point back in early 2017, now standing at $594 billion.

Beyond market cap, the S&P 500 requires four consecutively profitable quarterly earnings reports before the committee considers a company for inclusion, which the company only achieved following its earnings report ending June 30, 2020.

When viewed in this context, the decision actually doesn’t seem too delayed.

When accounting for the fact that the S&P index committee also has some discretion in their inclusion of a company, one could even argue that the committee was reasonably early in making the decision.

After all, at the time of the earnings report, which made them eligible for index inclusion, the stock was going absolutely parabolic.

Seeing as trillions of dollars are placed in S&P 500 index funds, it’s hard to blame the committee for exercising restraint regarding a volatile stock like Tesla.

Potential Trades Around the Inclusion Event

According to Bloomberg, the rebalance required to include Tesla in the index will result in roughly $70 billion of flows, including the sale of non-Tesla shares and the purchase of Tesla shares.

That’s not including all of the quants playing the rebalance arbitrage game and momentum traders capitalizing on the increased activity.

The most apparent trade is long Tesla, but that’s probably the weakest trade you could make.

As most know, the stock market is a discounting mechanism. Information known about tomorrow is reflected in today’s prices, which is why Tesla stock spiked 13% on the news, breaking out of a multi-week channel.

The stock has continued to rip since then.

The announcement may create trend continuation trades down the road, but as far as a “pure-play” on the S&P 500 inclusion, only going long Tesla is not it. 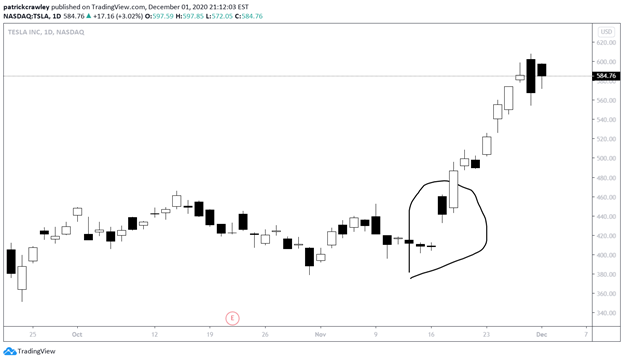 Another option would be to go long Tesla and short the S&P 500 index, betting on an outperformance.

Because these two assets have very different volatility profiles, the position’s weighting is a big question mark. Do you use implied volatility, average true range, beta?

When a trader like Dennis Dick of Bright Trading makes similar trades (long underpriced stocks at open, short ES futures), he beta-weights. However, given the catalyst, that might be an imperfect solution.

We’re not flying completely blind here, though. There’s some good academic research on the subject of index inclusion events.

One such study is the Diminished Effect of Rebalances by Konstantina Kappou of the University of Reading, which I was put onto by James of Robot Wealth from his article about Tesla being added to the index.

Among several other findings, Kappou found that index event trades’ profitability has reduced considerably since the Global Financial Crisis of 2008. Investment banks had to divest from their proprietary trading desks.

To make up for the lost trading profits, they sold licenses to previously proprietary software to all manner of financial institutions, including passive index funds.

As a result, passive funds considerably improved their execution ability and reduced its market impact through algorithmic trading.

Here’s one of the graphs from the study comparing the abnormal returns of these index inclusion events pre-2008 and post-2008: 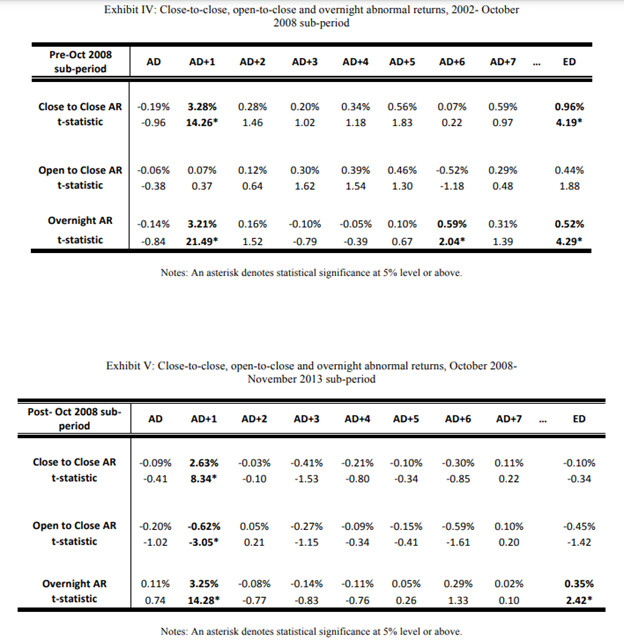 A 2020 study by Bennet, Stulz, and Wang had similar findings, with significant abnormal returns on the inclusion rebalance week, followed by a few weeks of downward drift.

Are We Near Peak Tesla?

Tesla is now worth over half a trillion dollars. At today’s market cap of $594 billion, it’s worth more than Warren Buffett’s Berkshire Hathaway, Visa, Disney, Coca-Cola, or Johnson & Johnson (not combined).

While Tesla and Elon Musk have proven skeptics wrong nearly every step of the way, the question of how much further Tesla’s stock price can go is ultimately one of valuation.

Today’s market price reflects the overall market’s projection that Tesla will grow stratospherically in the years to come.

But is there not some ceiling on this growth? If the stock doubled from today, it’d be worth nearly $1.2 trillion, making it roughly even with Alphabet.

The company’s price-to-sales ratio is at 21 right now. Compare that to the comparatively very asset-light Facebook, which has a P/S of just 10.

Tesla has to fulfill every single one of its lofty goals, and then some just to grow into today’s valuation, let alone expand it further.

That’s not to say that it won’t happen, but we’re talking about a car manufacturer with unimpressive revenue growth for its valuation, trading at twice the P/S ratio of Facebook.

It’s also citing some research on the historic returns of firms once they’re included in the S&P 500. Historically, inclusion in the index was associated with positive abnormal returns.

However, the second study cited in the last section, Does Joining The S&P 500 Index Hurt Firms? by Bennett, Stulz, and Wang, suggests that inclusion in the S&P 500 is now associated with negative abnormal returns in the long-run.

Tesla is a polarizing story stock with true believers on both sides. Some swear Tesla is a “zero,” with bankruptcy imminent, ending with Musk in cuffs.

On the other hand, Tesla supporters like HyperChange TV think the growth won’t stop: “one of the greatest fountains of profit to ever flow in the history of capitalism, will be millions of autonomous computers generating billions and billions of cashflow.”

Both sides of the debate have created entire online communities, complete with podcasts, news sites with original reporting, and spirited discussion.

If nothing else, Tesla awakens something in traders and investors that few other companies can.

As such, December 21 won’t be your average S&P 500 inclusion event. Nobody can predict the outcome, except that volatility will be high.