When people are out of work, scared of a deadly virus, and entire cities are shut down, air travel is one of the last things on their mind.

And the highly capital intensive airline industry is now paying the price for not hoarding cash in an industry with an extremely high rate of bankruptcy.

The White House made their intention to bail out the industry clear, but which airlines will need bailouts? Will the bailouts wipe out equity holders like the GM bailout did in 2008?

Seeing the 60% haircut the CoronaCrash gave to the airline industry, many investors are grabbing their fishing rods to do some bottom fishing. 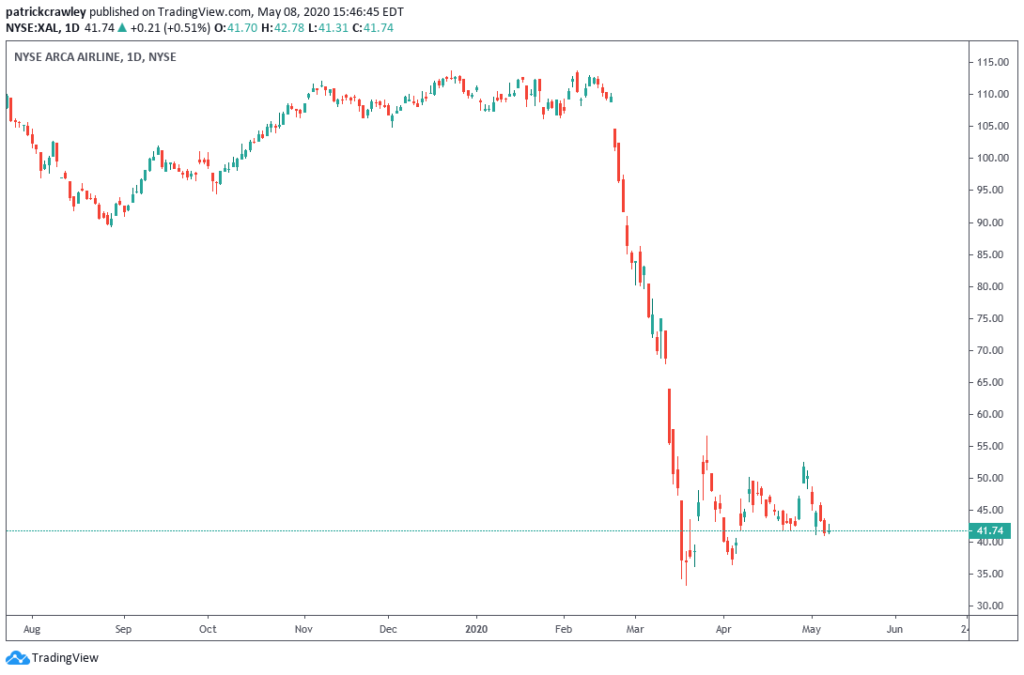 Warren Buffett has once said that the smartest move a capitalist could have made regarding airlines is shooting down the Wright Brothers.

If you bring up the idea of investing in an airline among a group of conservative value investors, you’ll get a similar response.

So, why is it that investors hate airlines, and are their stock prices being punished?

Regardless of the number of passengers aboard a flight, an airline pays basically the same price to operate that flight. Whether the airline sells two or 200 tickets, the fuel costs the same, their employee’s wages stay the same, and the route fees they pay to airports remain.

This means that the profitability of an airline is mostly dependent upon their ability to fill flights to near capacity. The struggle to control these massive fixed costs leads to the massive outsourcing of less popular regional routes to regional airlines. This happens when you book a flight with a major airline like Delta and end up on a small jet operated by a smaller carrier.

Inability to Earn Their Cost of Capital

The cost of capital means exactly what it sounds like; it’s a weighted average of the company’s cost to access capital, whether that’s through debt or equity. To most, if a company can’t at least earn its cost of capital over time, it’s an investable capital destruction vehicle.

The entire airline industry has been unable to earn their high cost of capital since the 1990s, according to a study from the International Air Transport Association: 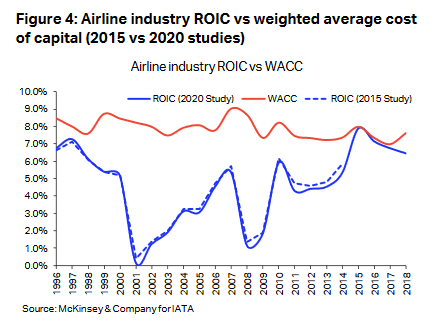 You know an industry is trouble when executives at the top companies are warning the public against investing. Here are a few choice quotes from executives at top airlines over the years highlighting their distaste for the industry’s economics:

“People who invest in aviation are the biggest suckers in the world.”

“These days no one can make money on the goddamn airline business. The economics represent sheer hell.”

I’ve never invested in any airline. I’m an airline manager. I don’t invest in airlines. And I always said to the employees of American, ‘This is not an appropriate investment. It’s a great place to work and it’s a great company that does important work. But airlines are not an investment.’”

If you’re gonna put your money in a company in the course of turmoil, it’s great to see management buying alongside you. It tells you that the most informed folks about the company agree with your thesis.

With that said, even at the best-run airlines like Southwest, there’s been little to no insider buying in the larger airline stocks, outside of a JetBlue board member making a roughly $500,000 purchase.

We usually use the cash burn rate metric to look at small startups, not massive S&P 500 components. But right now, these companies mirror startups in some ways: their revenue is near-zero while holding a big chunk of debt. Their ability to weather the coming months of near-zero revenues is a significant determiner in their survival.

Let’s look at a few different metrics related to short-term liquidity among their airlines. We won’t pay much attention to profitability metrics, because the revenue of all airlines is at just a fraction of what it was before the crisis, and we’re looking at survival candidates here.

The next metric is the Cash Ratio, a simple ratio that divides accounts receivable and short-term debt and divides them by cash and cash equivalents, resulting in a ratio. Like the Current Ratio, a cash ratio above 1 indicates a company’s ability to repay it’s short-term liabilities and still have some cash leftover.

It’s a crude ratio meant to give you a rough idea about financial liquidity and isn’t a replacement for in-depth balance sheet analysis. 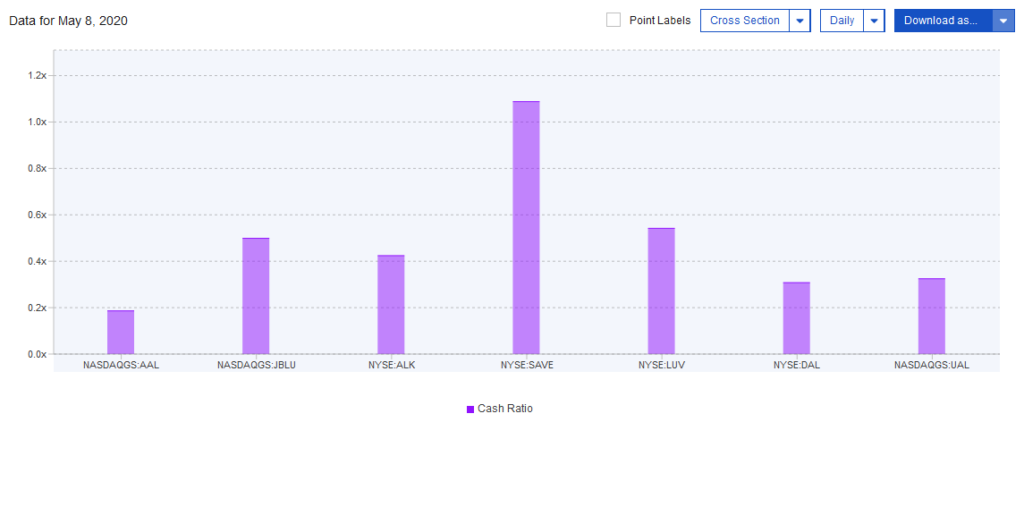 As you can see, American Airlines (AAL) is in a horrible position, with only enough cash to cover about 20% of its short-term liabilities. Spirit Airlines (SAVE), on the other hand, has a relatively healthy cash position compared to the rest of the bunch.

Next, we can use another rough accounting formula called Days Cash on Hand, which looks like this:

Because determining non-cash expenses for each airline is beyond the scope of this article, we’re going to do a rough calculation, which looks like this:

Since the market crashed in late February, the finance world has been eagerly awaiting a move from Warren Buffett. With Buffett’s relentless bullishness on the long-term prospects of the US economy, we all expected him to make some purchases. Instead, his only move so far has been to liquidate his entire position in the airline industry.

Buffett didn’t offer us much reasoning other than “the world has changed,” so it’s difficult to make any extrapolations about how his mindset regarding airlines has changed.

Buffett has a checkered past investing in airlines, this being his second failed investment in the industry. After his first run-in with airlines with USAir, Buffett opined that there should be a 1-800 number for investors to call each time they want to buy an airline stock, reminding them not to.

It’s challenging to make the argument for investing in the airlines. Between the industry’s structural problems, the lack of insider buying, the economic shutdown and travel restrictions, and Warren Buffett’s exit, they don’t have a lot working for them.

And that very fact is the only thing playing in their favor.

At this point, the most bearish of scenarios is already priced-in to the airline industry, making anything other than complete failure a pretty positive outcome.

Disclosure: I have small speculative call positions in JETS and LUV