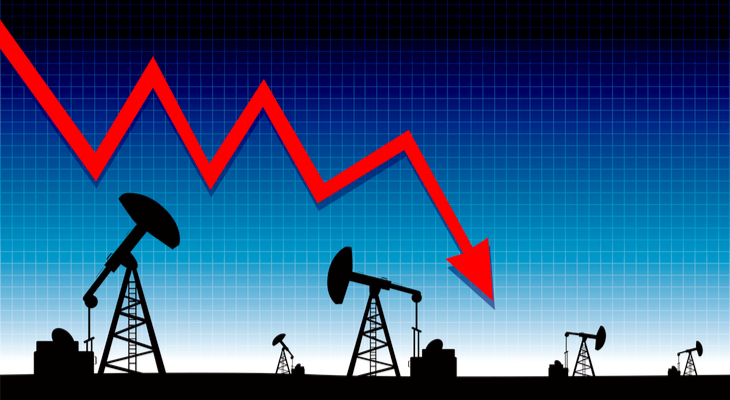 If there’s one story right now that deserves your attention, it’s what’s been going on with oil prices. More specifically, prices for U.S. benchmark West Texas Intermediate (WTI) have been falling significantly over the past while. However, no-one was expected prices to fall down into the negative on Monday, something that has never been seen before in history.

Whereas barrels of West Texas Intermediate was trading around $15 per barrel this weekend, prices ended up plummeting to as low as negative $37.6 per barrel on Monday and have now sitting at negative $2 per barrel. Contract holders for May delivery, which are expiring April 21st, will end up having to pay potential buyers to take this oil off their hands.

It begs the question, why did this happen, what does this mean for the markets, and how should investors react?

Why did this happen?

If you’ve been following the news, you will know there have been two main drivers for oils plummeting prices. The first of which, and the biggest reason by far, is the ongoing coronavirus pandemic.

With travel and tourism having been ground to a halt as people stay in their homes for the most part, demand for oil has already been lower than its ever been. The second reason came down to a surprise price-war between Saudi Arabia-led OPEC and Russia that started last month, due to the latter not agreeing to a proposed supply cut.

While they eventually came to an agreement, the damage to the global oil market had already been done.

The biggest problem is that there’s not enough oil storage around the world now that demand is so low. Oil tankers have already been filled to capacity and sent off into the ocean without a destination as a temporary solution to store some of this oil, but there simply aren’t enough tankers to go around.

With futures contracts for May delivery scheduled to expire on April 21st, it’s not surprising that tons of investors wanted to sell off their contracts before the expiry date.

While wild price swings are fairly common in the futures markets, especially surrounding contract expiration dates, this much of drop in price has never been seen before in the oil markets.

What does this mean going forward?

This begs the question; if this much of a drop happened for oil contracts with May delivery, what will happen to next month when June delivery contracts expire? Will they continue to plummet even more?

As of right now, prices for June oil contracts have already fallen by 18% as well as an aftereffect of Monday’s price plunge. What is certain, however, is that storage space is likely still to remain a problem for the next few months at the least, so it wouldn’t be surprising if oil contracts for June delivery continue to plummet as well in the coming weeks leading up to their expiration date.

At the same time, many oil producers have completely shut off production altogether. Canadian oil companies operating out of the oil sands have effectively halted all operations, with prices for West Canadian Select oil trading at literally $0 per barrel.

While this reduced output will eventually help even out the supply problem, it is still not going to solve things in the short term. The coronavirus and this ill-timed price war between the Saudi’s and the Russians have created the worst market conditions for energy companies in over a hundred years.

While its possible that prices will rebound in the coming days as groups like the Texas Railroad Commission consider enforcing mandatory supply cuts (price rebounds are often seen following steep selloffs such as the one seen on Monday) nothing’s guaranteed, especially considering how poor the market fundamentals are for oil right now.

What does this mean for everyone else?

While cheap oil prices might seem like a good thing when trying to fill out your gas tank, the effect this will have on the American economy, including the resulting bankruptcies and job losses, could be pretty big.

Stable oil prices, even if they are on the lower side, are almost always preferred by everyone in the oil industry over highly volatile prices. This uncertainty makes doing business incredibly challenging, and the end result for the American economy from a bird’s eye view won’t be pretty.

This year is shaping up to be a historic year for the financial markets. Retail investors have the privilege (or the misfortune, depending on your perspective) of living in some of the most interesting times we’ve seen in many years.