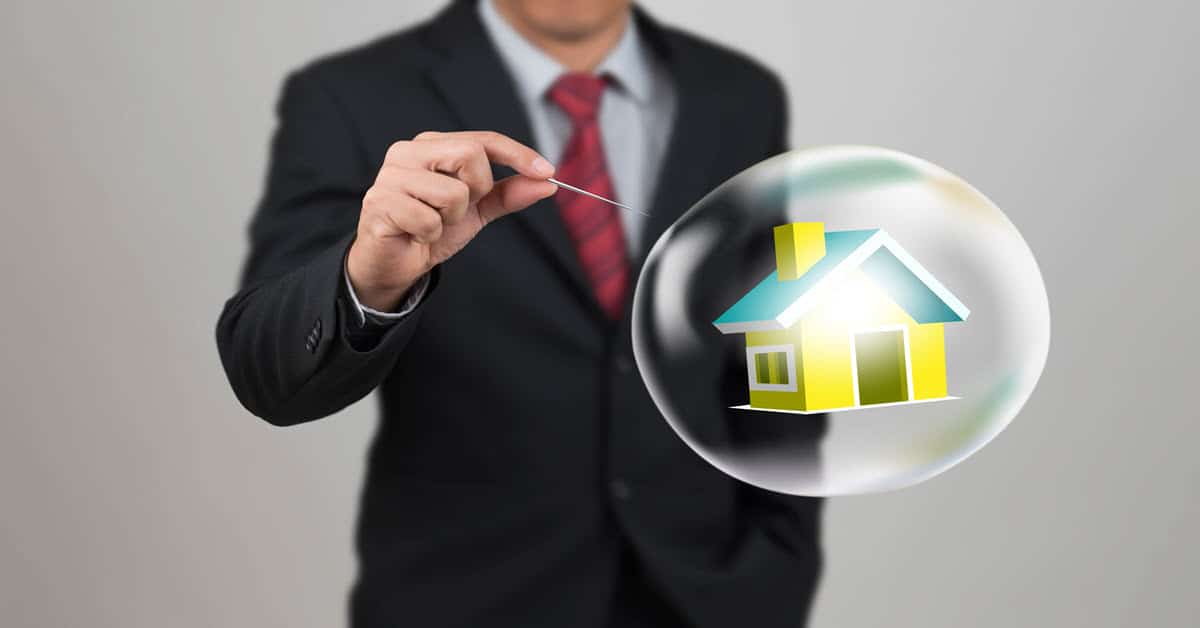 If you’re looking at the stock market to sniff out a potential asset bubble, you may be looking in the wrong place. It may be right in front of your face.

When the millennial generation came of age, we heard all about their preference for renting – not out of any love for renting necessarily but because many of them were priced out of the housing market – and their supposed desire to live in urban areas with all the cultural offerings they provide.

Along comes the Covid-19 pandemic, and suddenly nobody wants to live in cities anymore. Instead, everyone it seems is moving to the suburbs, enabled by low-interest rates and the necessity of working from home. That has driven up the price of homes just about everywhere. Indeed, the National Association of Realtors announced last week that in the third quarter, every single one of the 181 metro areas it tracks showed a year-over-year price increase, something that’s never happened before. Moreover, 65% of them – or 117 – rose by double-digit percentages, led by a 27.3% jump in Bridgeport, CT, the county seat of Fairfield County, which includes Greenwich, CosCob, Darien, and other New York City bedroom communities.

Needless to say, the runup in home prices nationally increases the income needed to afford a home. The median price of an existing single-family home nationally jumped 12% on a year-over-year basis, to $313,500, the NAR reports. At the same time, the monthly mortgage payment on a typical single-family home rose to $1,059, and the family income needed to afford a home climbed to $50,819.

“At this rate, home prices are growing four times as fast as median family income, which was 2.9%,” the NAR warned. “The affordability situation will not improve even with low-interest rates because housing prices are increasing much too fast.”

Is this sustainable? And are trends that are tied to the pandemic, such as working from home and avoiding large cities, also going to be permanent? If even the almost-always bullish NAR is worried, maybe we should be too.

But dollars and cents is only one part of it, albeit the biggest one. The other is lifestyle.

We also seem to forget that eventually, the pandemic will pass into history, and many millennials will suddenly wake up and discover that they hate the suburbs! Not all of them, certainly, but enough to matter.

Meanwhile, the lame-duck director of the Federal Housing Finance Agency, Mark Calabria, has ruled that Fannie Mae and Freddie Mac will need to hold about $283 billion of capital to absorb possible losses under his “recap and release” plan to return the two agencies – which have been under government conservatorship since they failed in the 2008 housing crisis – to the private sector. They currently hold about $35 billion, so they would need to raise another $250 billion, either from retained earnings or equity sales or both.

As the philosopher, George Santayana famously said, “Those who do not remember the past are condemned to repeat it.” What’s hard to fathom is how anyone could favor returning the two mortgage agencies – which together guarantee about half of the $11 trillion of residential mortgages outstanding, and which borrowers and lenders depend on — to the private sector in light of what happened just a dozen years ago.

For those of you too young to remember, or have chosen to forget the not-too-distant past, Fannie and Freddie used to be semi-private companies. Their individual stocks traded like other private companies, no different than Apple or Google – except for one crucial difference. The two companies were government-chartered, which meant their securities carried the “implied” – but not the legal – backing of the full faith and credit of the U.S. Government. At least, that’s what investors wanted to believe.

So investors were more than happy to provide Fannie and Freddie as much money as they wanted to buy up billions of dollars of mortgage loans that borrowers had little prayer of ever paying back. Eventually, the mortgage market collapsed, along with home values, which was the main reason behind the 2008 global financial crisis.

Now some people in the government would like to try that all over again.

Fortunately, the incoming Biden administration wants no truck with this plan and would prefer to leave Fannie and Freddie just as they are. Not only have the two agencies repaid every penny they borrowed from the Treasury in the wake of their failure, but they continue to pay hundreds of billions of their profits into taxpayer coffers. Why mess with that?

So keep your eye on the housing market. But try not to let it spoil your Thanksgiving.