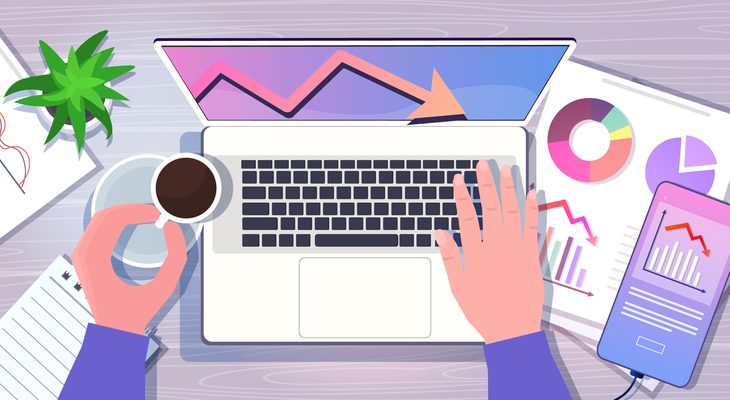 Top-down investing is a forecasting approach that evaluates the broader macro picture before drilling down to look at the finer details.

A macro forecasting approach is one where you might first look at global economic growth and factors that analyze global trends before looking at the investment thesis for an individual asset.

A top-down approach to investing prioritize macroeconomic factors the most. The steps you might take could be:

A top-down approach is often compared to a bottom-up investing technique.

A bottom-up method starts first with a company’s fundamentals and works its way up eventually analyzing the macro environment. In a bottom-up approach, the company fundamentals are prioritized.

The Details of Top-Down Investing

The first step in top-down investing is to get a gauge of the current market environment.

Generally, assets like stocks, are evaluated using projections of future growth. To determine potential future economic growth, its helpful to understand the present.

Economic indicators such as Growth Domestic Production, Inflation, Interest rates, as well as, job data and sentiment are key metrics that you can use to determine the current market environment. The macro-environment has several stages.

Different assets will outperform during each stage of an economic cycle.

An economic cycle moves from contraction to expansion and tends to repeat over time. Changes in an economic cycle are driven by interest rates, corporate profits, credit, and employment.

There might be unforeseen events that change an economic cycle like the COVID-19 pandemic or the over-leverage of derivatives that created the “great recession”.

The tenor of each phase of an economic cycle can vary from decade to decade.

An economic cycle has 4 phases.

The beginning of an economic cycle commences with a recovery from a recession which is defined generally as 2-consecutive quarters of economic contraction.

For example, if the GDP is negative for 2-quarters in a row, the economy is deemed in a recession.

The mid-cycle usually extends for the longest period of the 4-cycles, as growth starts to moderate from the torrid pace of the beginning of the economic cycle. Borrowing accelerates leading to robust profitability. This generally shifts monetary policy to a more neutral stance from an accommodative stance.

During the late-cycle economic output reaches its peak, but employment is still accelerating. Corporations are trying to extend profitability by reaching for market share and adding employees.

This is a leading indicator. Interest rates also fluctuate first declining during a recession and the beginning of a cycle, then moderating and eventually rising in the late-cycle.

Employment is also a late-cycle phenomenon.

Corporations generally layoff employees during a recession and the beginning of a cycle and then add during the mid and late-cycle.

How Asset Perform During Each Phase

A top-down approach would start with evaluating several of the economic indicators that would help you determine the current phase of a business cycle. Each sector will provide you with differing returns depending on the phase of the economic cycle.

Other factors such as productivity and regulation can alter the historical performance of a sector during a particular phase of a business cycle.

At the beginning of an economic cycle, economically sensitive sectors outperform while defensive sectors underperform. Usually, growth sectors like consumer discretionary, technology, and industrials outperform the most, while financial, real estate, and materials only slightly lag.

Defensive sectors such as consumer staples, utilities, and the energy sector underperform. During the mid-cycle, communication services take the mantle and outperform.

What is important to understand is that outperformance does not always mean positive returns.

Evaluating Companies Within each Sector

You can then drill down into the financials of each company and determine if they are good investment prospects.

How Top-Down differs from Bottom-up

While top-down investing initially looks at the macro environment, a bottom-up approach initially focuses on individual companies as its priority.

Once you find a company that meets your investment criteria, you would then look at different macro factors such as growth, employment, and inflation to determine which stage of the economic cycle you are in to decide if the sector is likely to outperform or underperform.

Whether you use a top-down or bottom-up approach, it is important to understand that the macro environment is an important factor in determining the performance of a stock and a sector.

You can choose the best company, which might be undervalued but if you buy during an extended recession, the underperformance could extend longer than you expect.

By looking at the macro backdrop first, a top-down investor can get a gauge for which sectors will outperform before they undertake the detail needed to find a stock that will beat the broader markets.