The ability to detect a trading signal above the noisy day-to-day gyrations of the market is crucial for anyone who seeks to become a trader.

Buy and hold investors only make money when the market goes up, but when you have a long timeframe, the averages work in your favor.

But traders have to make money in all situations, whether it’s a raging bull market, a steep correction, or an extended period of choppy trading.

Some patterns have strictly bullish or bearish connotations, like the bull flag pattern and the double bottom formation. These patterns are usually used to spot a continuation or reversal of a trend before the price moves in that direction.

However, not all patterns can be stuck with a label of ‘bullish’ or ‘bearish’. Some patterns, like triangles or pennants, can form on a chart and wind up being bearish, other times the triangle appears and the next move is upward.

The ascending triangle we’ll discuss today is usually the result of a continuation in a bullish trend, but that won’t always be the case. Like many tools in technical analysis, the ascending triangle isn’t some sort of stock market Bat Signal that lets everyone know a big move is coming.

Traders need to be cautious of false breakouts and make sure they aren’t seeing something that isn’t really there.

What is the Ascending Triangle?

The ascending triangle is a continuation pattern that usually results in a bullish move, but not all triangles will break out in this fashion if the trend isn’t in place.

An ascending triangle is noticeable by looking for price trends that result in higher lows but steady, similar highs. 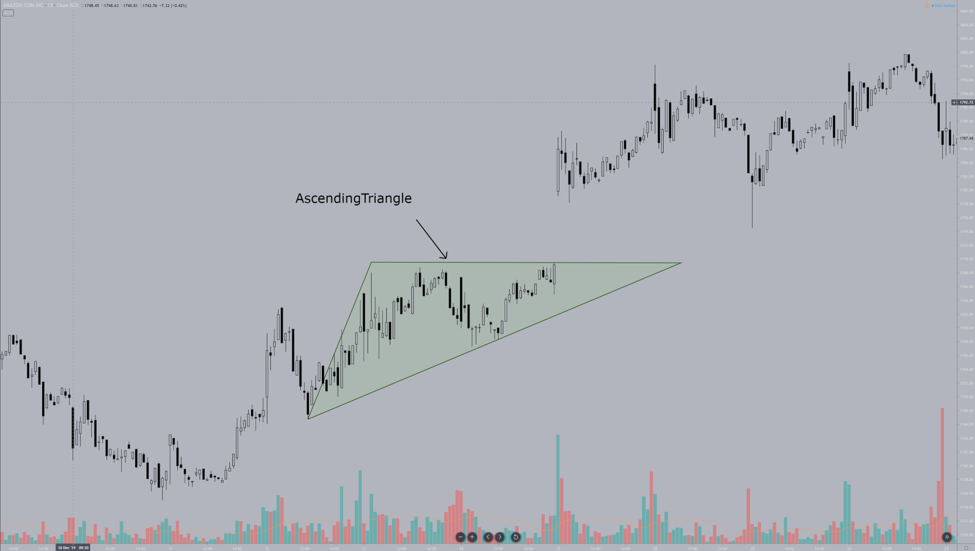 In this chart here, the triangle takes shape after resistance to the upside is encountered. The shares here had been in an upward trend, but the price continues to stall out despite lows reaching higher and higher levels.

A trader seeing this pattern may purchase the shares after the price bounces off the ever-increasing support price level, or when the stock finally breaks through the previous level of resistance.

Either way, the move to the upside in this example was a strong one.

Breaking Down the Ascending Triangle Pattern

The ascending triangle is often bullish, but breakouts can occur both to the upside and downside when this pattern appears.

If the price descends below the support level on the bottom part of the triangle, the breakout may occur to the downside and shorting the stock would be a wiser move than buying it.

Remember to look for trend confirmation before trading off an ascending triangle pattern.

Ardagh Group is a packaging and containers producer based out of Luxembourg in the European Union, but their products are distributed all across Europe and North America.

Like most firms, the coronavirus pandemic caused the shares to plummet (even though a packaging company seems like a smart buy when the world depends on UPS and Amazon).

The shares found a bottom in mid-March and began a new uptrend with increased volume before running into resistance around the $15 mark. When the price retreated from this level, it found new support just below the $12 level before challenging $15 again.

Another failed breakout occurred at resistance, but the next lowest low was established well above the $12 price. The shares continue to make higher lows along the lower trendline and it seems a breakout could be imminent here. 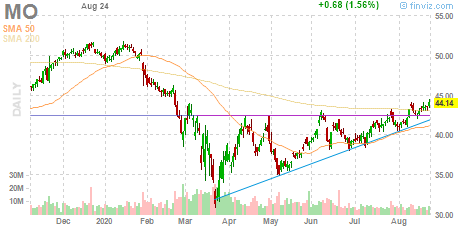 One of the most hated companies in America (unless you’re a dividend investor), tobacco giant Altria makes cigarettes under the Marlboro label, but they also produce a variety of cigars and wines and have interests in finance leasing services.

The company is currently approaching its 200th birthday.

Altria recently broke out of a long-bothersome resistance level around the $43 level. After dropping close to $30 per share at the height of the pandemic, Altria began making higher lows along the lower trendline but consistently met resistance at the $43 mark.

This trading pattern continued until making a new “highest low” above $40, after which the stock finally broke above $43 and continued upward towards $45.

The ascending triangle is an important pattern to watch out for since it could signify that a long anticipated breakout is about to occur.

Of course, you may also try to trade an ascending triangle pattern to the upside, only for the bottom to fall out below the support level and the stock makes a new low.

Remember, probabilities are what matter to traders – after all, if patterns worked 100% of the time, you wouldn’t need us, would you? Here are a few tips for trading this pattern:

Like all trading signals, the ascending triangle is a great weapon to have in your arsenal, but it can’t be the only one. Technical analysis is only as good as the foundation it stands on.

Just because a chart pattern appears doesn’t mean you can predict the next move, especially if volume is low or the trend isn’t in your favor.

Always be sure to confirm that volume and trend are in your favor when trading a pattern like the ascending triangle and be on the constant prowl for false breakouts.

Nothing hurts more than biting on a false breakout and getting out of a trade right before the real breakout occurs.