Whether your an investor or a day trader, knowing how to tell if a stock is bottoming out is a great way to find good entries in stocks.

“Buy the dip” is one of the biggest memes on Financial Twitter (‘fintwit’). Users like Ramp Capital are famous for their relentless bullishness in the face of corrections in the broad market.

As such, traders and investors are always looking for clever ways to spot the “bottom” of a market pullback, whether in the index or an individual stock.

While this sort of thinking can be dangerous to a trader, it makes complete sense to try to get the best entry when buying a pullback.

In this article, we will talk about how to tell if a stock is bottoming out and if the time is right to be buying.

Why Would You Want To Know How To Spot a Market Bottom?

The primary reason traders are looking to spot a short-term bottom is to enter a strong prevailing trend on short-term weakness–also known as a pullback, consolidation, or retracement. They all mean the same thing.

Trading is relative, but generally, the best entry point is as close to the bottom of the pullback range while still having signals that the pullback is ending. In other words, it makes sense to give up a better price to have some confirmation on the trade.

This is a balancing process between buying a failing trend and waiting for too much confirmation before the trade entry is no longer favorable. 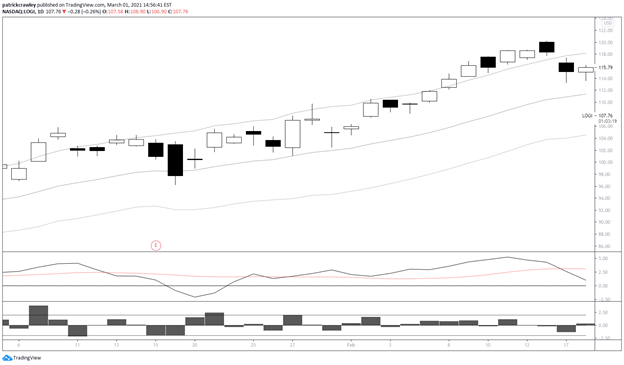 Clearly a strong trend with some positive tailwinds like the recent earnings surprise and the pandemic-driven increased purchases of computer peripherals. Towards the right end of the chart, you can see that the stock began to retrace a bit and made a pullback.

If we move down to an intraday chart–15-minute bars, we can see signs that the pullback was ending: 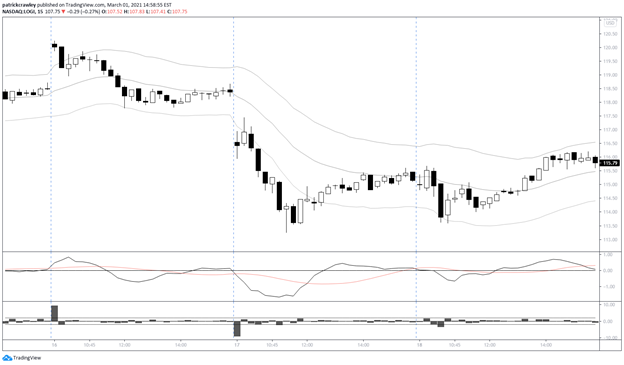 This is a situation where it’s alluring to buy near the bottom, but without confirmation of a potential reversal of the short-term weakness, the stock might keep declining.

These are the types of trade-offs that each trader has to make individually. If you buy near the bottom, you get a better price, but you’ll more often be in trades that continue to decline against you.

If you wait for confirmation, you get a worse price but might avoid some of the weaker trades.

In the above example of Logitech, the swing trade ultimately failed, if you’re wondering. But it serves as good a demonstration as any.

It might seem ironic that we’re looking at a failed trend pullback trade in an article about “spotting the bottom of a pullback,” but if you’ve been trading or at least researching trading for any period of time, hopefully, you can appreciate the sentiment.

Why Not To Look For The Bottom of a Stock

If you’re trying to fight the prevailing trend and pick bottoms, you’re buying a falling knife more often than not.

There should be a million disclaimers attached to that because plenty of traders actually specialize in this trading style, which is called mean reversion trading.

The problem with mean reversion trading is that it’s much better suited to professionals. Mean reversion traders know they will take massive losses from time to time, and they factor that into their trading models.

Many of them are hybrid traders, relying both on discretion and their systematic trading models.

In other words, it’s not for the faint of heart. Quants like Cesar Alvarez and Ernie Chan can provide some useful information about this strategy, but it’s beyond this article’s scope.

With all of that said, sometimes we’re not blessed with a market like today’s bull market trend, and traders are forced to adapt. Still, few traders would argue with the statement that it’s easier to trade trends (when they’re available) than to trade a mean reversion style.

Of course, this is a very biased view, but I’d guess that it’s true for most traders.

The broad market has a huge influence on any individual stock. The correlation level varies, but all stocks are affected to some degree, even if they’re not exposed to the same level of economic cyclicality that most businesses are.

One of the critical things to ask when you’re looking at a retracement in a stock is: is the broad market driving the pullback? If it is, how is the stock doing in comparison?

You can’t use percentage numbers here because of different volatility and beta levels, but instead, use key levels and market structure.

For example, if the Nasdaq 100 just breached a recent low, did the stock you’re looking at hold its recent lows? If so, that’s relative strength and is a very bullish sign for the individual stock.

Let’s look at an example in Sonos (SONO), a home theater audio stock, on February 23rd when the Nasdaq 100 was dropping significantly: 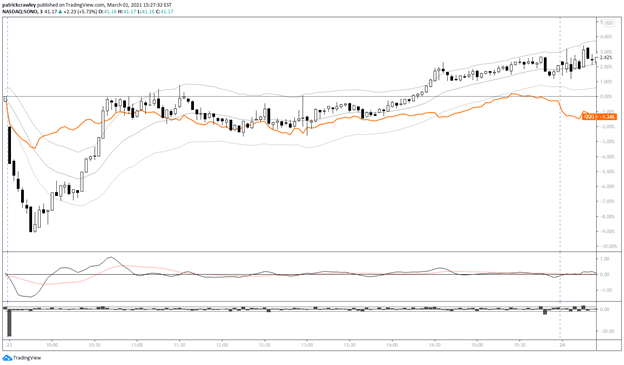 At the open, longs (including myself) were puking SONO, and it was showing real relative weakness compared to the Nasdaq 100 (orange line).

However, there was a substantial shift in the character of the price action around 10:15 am EST when it breached its high for the day and was able to hold above it, showing considerable relative strength.

Many times, in the strongest stocks, they never even show that relative weakness.

What happens in the strongest stocks is that the broad market is tanking for the day, while the individual stock is just not going up. The price action is hardly bearish, and there’s clear support near the lows of the day.

This is like the market talking to you, giving you a sign of that stock’s strength. Of course, no indicator is entirely reliable, but relative strength is a well-established signal used by many momentum traders.

What is a momentum divergence?

The trading world is weird because we create all of these convoluted terms for simple things. In this case, a momentum divergence means that price and momentum (which is basically the rate of directional price change) tell a different story.

Imagine a popular nightclub. At midnight, there are hundreds of people lined up to get in the club and hundreds more inside.

When 3 am rolls around, there are still hundreds of people inside of the club, but far fewer standing outside waiting online to get in. This is basically a momentum divergence.

The amount of people in the club is still increasing, but the rate at which new people enter the club has declined precipitously. Common sense tells us that the most active part of the night for this club has ended.

The concept is similar in the stock market, except it’s never as obvious as the nightclub example.

The price of a stock in an uptrend might still be going up, but the rate at which it is going up relative to recent history is slow. That’s a momentum divergence.

We can use momentum divergences to get clues about the strength of a trend.

t the very least, a momentum divergence in an uptrend might lead us to conclude that a stock might simply stop rising, rather than immediately assuming an imminent reversal to the downside.

Oftentimes, when trying to enter on a retracement, it makes sense to see what the stock looks like on a lower time frame.

In this case, if we’re trading on the daily chart, looking at the 15-minute chart might make sense to get a more granular look at the price action.

In the midst of a daily chart retracement, the 15-minute chart typically looks quite bearish, and in a downtrend.

Trend traders hate trading against the trend, so this sort of multiple time-frame analysis can lead to confusion, and result in analysis-paralysis, allowing the trade to pass you by.

A great potential clue is a momentum divergence. It’s a sign that the selling is slowing down and that the bears are losing their control over the short-term price action.

See the chart below of SONO. The left side is a multi-day pullback within the uptrend on the daily (right of the chart).

Until the 28th, the stock was moving pretty directionally, high-to-low, albeit with a ton of noise. After that, the short-term price action began to shift upwards, but not decisively.

But we really see a change of character in the beginning of February-where. On the 1st of the month, the stock opened at its lows and reversed and had a strong close, gapping up slightly the next day. 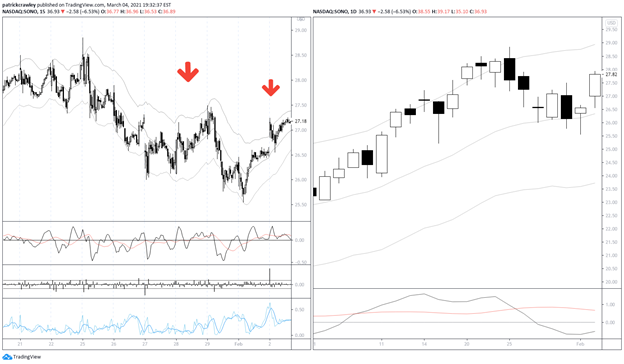 This shows the problem of applying simple mental frameworks like the nightclub example. If you’re bullish on the daily chart, there’s no lower time-frame entry that is screaming out at you to buy.

The price action on February 2nd would serve as a signal to many, but the stock had already moved away from an ideal entry point by then (see the daily chart on the right).

However, perfection is the enemy of good. There were multiple points on the 15-minute chart that were false signals; they didn’t lead to imminent reversal back into the prevailing daily chart trend.

But if the trade idea is good, all this multiple time-frame analysis does is help you put the odds a little bit more in your favor, nothing more.

Some questions to ask yourself when trying to enter on a trend retracement are: is the dominant trend fleeting? Is this a brief upswing in the midst of a longer-term range or downtrend?

Many times we are led astray by how much data is on our charts. If we’re only viewing the last 20-30 bars, that view can make us think we’re approaching the blue skies of new highs.

In some cases, a quick zoom-out of the chart tells us there’s significant bag holder overhead supply from previous highs reached just months ago.

Conversely, sometimes we can get too excited amid a very strong trend. If the chart is increasingly looking like a hockey stick, we should consider that the current rate of change can’t last forever.

As stocks get extremely stretched and start to significantly deviate from average prices, the odds for successful trend pullbacks, bear flags, etc., begin to decline.