Learning how to research stocks can seem like a daunting task but it doesn’t have to be. Below we will go over some ways on how you can find companies that are undervalued.

I once heard a hedge fund manager say “you have no right to buy a stock until you’ve done >100 hours of research on the company.” I think institutional investors managing millions, maybe billions of dollars in client capital should probably adhere to this mantra.

However, if you’re a position or swing trader looking to do some background research on the technical setups you take, it’s completely infeasible (and likely unnecessary) for you to do this amount of research for each trade.

But, most would agree that some research, even if surface-level, is required to put your money in a company for longer than a few weeks. So how do you get a reasonable understanding of a company in a short period, like an hour or so?

It comes down to a few factors:

The financial thin slice is a simple heuristic I use to quickly understand how the market is pricing a company.

I ask two questions of the company when forming a thin slice.

First: is the company growing sales, earnings, or expanding margins? If so, is the market putting a premium on this growth in the form of higher multiples? Pay attention to the five-year growth trend of these metrics, while comparing price performance. Does the market adequately reward their growth?

If the company isn’t growing, is it priced at a low multiple? Are the company’s assets trading at a steep discount? Value stocks tend to reside in less “sexy” industry and thus are negatively affected by net outflows of their respective sectors.

This makes for great bargains when it comes to investing, but as a result, these companies don’t tend to create great long setups.

Of course, the ideal scenario is “growth at a reasonable price,” but these are names are typically harder to find and are generally less liquid than their large-cap counterparts.

Can you find a company trading at a lower multiple than their industry group, without blaring red flags (shady accounting, bad management, disregard for shareholders, etc.)?

Jesse Stine, author of Insider Buy Superstocks finds microcaps that match this criteria and rides them for months at a time.

This is the idea of relative value. Sure, a value stock is cheap on an absolute basis, but how about when you compare it to other value stocks of the same strain?

If you’re researching a stock with earnings growing at a 50% compounded rate in the tech sector, find the tech stocks with similar growth rates and compare their valuations.

Let’s take the auto industry for example. If we look at an auto OEM in a vacuum, the companies are usually much cheaper than the broad market. However, we have to remember that auto OEMs suffer from low margins, a higher probability of bankruptcy, and meager rates of growth.

As such, they’re rewarded with lower multiples. So it makes sense to compare like to like, this will give us a feel about the market’s sentiment regarding this company, relative to its own industry.

Here’s an example of a few US-listed auto companies, comparing their respective valuations by EV/EBITDA, a popular metric for valuing auto makers. 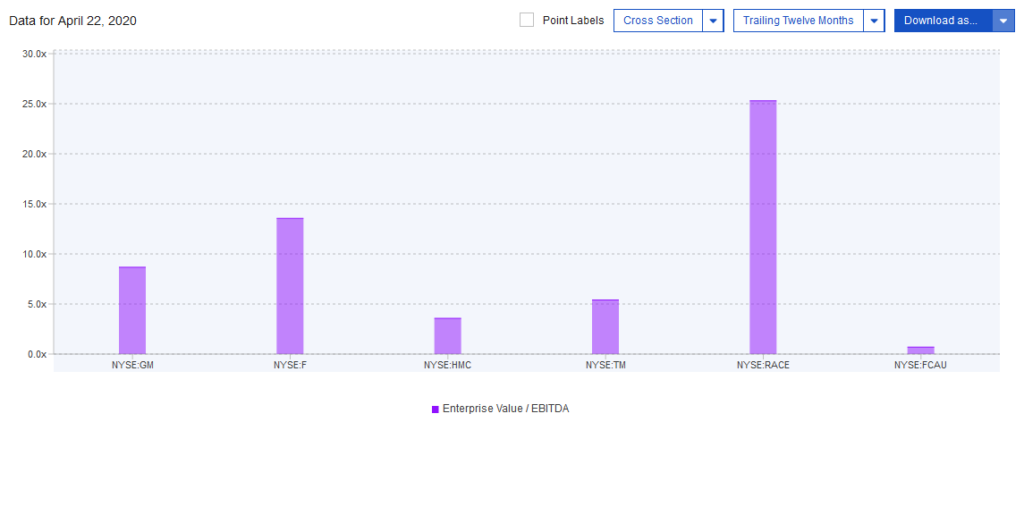 The simplest way to get a quick qualitative feel for a management team is through listening to their conference calls. It’s definitely always best to read the Management’s Discussion in a 10K, however, this article is aimed at position traders who want to understand the shares they’re holding, not long-term investors.

SeekingAlpha typically publishes earnings transcripts of conference calls. I love using conference calls to get a quick feel for the management and how they expect future operations to look like. Of course, their claims should all be met with skepticism as they want you to buy stock.

When a small, unfollowed company has a big breakout quarter, I love listening to those conference calls. Because small companies are generally pretty easy to understand, it’s easy to get a feel if the quarter’s performance is sustainable.

If it is, you can get a rough estimate of the “P/E run rate.” You can reprice the stock based on the most recent quarter’s performance. Oftentimes in these small companies, it takes the market a while to react.

You can quickly spot shoddy management teams when they deal in “excessives,” like a few of the following examples:

There’s plenty of highly profitable companies that treat their employees like garbage, but I think it’s fair to say that they’re the exception rather than the norm. In general, an employee won’t be able to share/care about a company’s vision if they’re not valued.

A simple way retail investors can survey employee sentiment is through job sites like Glassdoor. Glassdoor allows employees to write anonymous reviews of the management, operations, and day-to-day at their company.

It’s also a great way to get a qualitative feel for how new initiatives are trickling down to the lower level.

It hardly makes sense for a position trader to build a discounted cash-flow model for a position that will last months at the most. However, there’s some pretty useful tools that allow you to “plug and play” with popular financial models, allowing you to alter the assumed growth rates and such to arrive at a target price.

The best among these tools is Finbox (disclosure: affiliate link). Here’s an example of a prebuilt DCF on GameStop.

If you expect the company’s growth (or lack thereof) trend to continue, you can input reasonable assumptions about their future growth, and arrive at a general valuation.

As you can see in the image above, the prebuilt model assumes GameStop has lots of upside from current values, but that’s just based on the preset assumptions.

If you were just to alter the revenue assumptions to forecast revenue contraction for the next two years, followed by stagnation for the eight years following, you get a drastically different price, one that accurately presents it’s current market value:

Get a Second Opinion

There’s a popular investing mantra that basically says you shouldn’t listen to anybody, and to do your own research.

This certainly makes sense, there are lots of adverse incentives at play when someone publishes their investment research publicly: usually they’re not trying to explicitly make you money, but have some other side-motives at play.

However, it’s pretty conceited to believe that your research is the only research that will serve you any value. Regardless of the incentives of those around you proposing investment theses, their arguments and facts should stand independent of the personalities perpetrating them.

If the stock is of the larger variety ($10B+), look for notable short sellers of the company. The financial media loves publishing their stories because they’re controversial and get people clicking.

I’m talking about folks like Jim Chanos and Andrew Left. These folks have a tendency to illuminate issues that the bulls are missing.

If you fail to find a highly reputable fund manager and discuss your stock in-depth, SeekingAlpha is a good alternative. The challenge with sifting through SA is the inconsistency in their publishing quality.

While they’ve been getting better as the years pass, a large bulk of the articles essentially repost charts from the company’s investor deck and pull quotes from the financial media. There are diamonds in the rough, though, like Long-Short Manager and Chris DeMuth Jr..

I’ll be the first to tell you that you can’t truly figure out a company in an hour. Even a regional company that operates a simple business will still require some deeper due diligence to ensure you’re not missing anything.

But there has to be a filtering process.

Whether you need a quick view of a company because you’re going to trade their stock, or you have a long list of stocks to research and require time-efficiency, the methods outlined in this article should give you a brief “thin slice” of the company, enabling you to form a rough thesis.