The crowd is always wrong, right?

Maybe most of the time. But the idea of “buying the dip” in the stock market might be a rare example of the wisdom of crowds at play in financial markets. It’s an old idea with heaps of academic support.

That’s not to say that the stock market always goes up–far from it, and as a matter of fact, when those declines do come, they’re far more violent than the advances.

That’s an oversimplification but it applies to virtually every trading strategy save for the most complicated HFT systems.

It’s key to note that “buying the dip” as a mean reversion trading strategy tends to work best on a shorter time frame, typically less than one month.

In this article, we’re going over three ways to find mean reversion or “buy the dip” trading opportunities.

Make Sure The Trend is Still Intact

You can find the most bearish pattern on a 15-minute chart but that doesn’t necessarily tell you anything about where the security will trade on a daily time frame.

So, before buying the dip on a market decline, look to the higher time frame trend.

As traders, that means the daily and weekly charts. When the trend is still intact, buying the dip is simply buying a pullback within that trend, much like you would buy a bull flag on an intraday chart.

Far be it from me to tell you the best way to gauge market trends, but the most fundamental method of identifying trends is difficult to argue with: the higher high and higher low, or the “ABCD” pattern.

If a market decline fails to penetrate the most recent higher low, the trend is still intact, plain and simple. 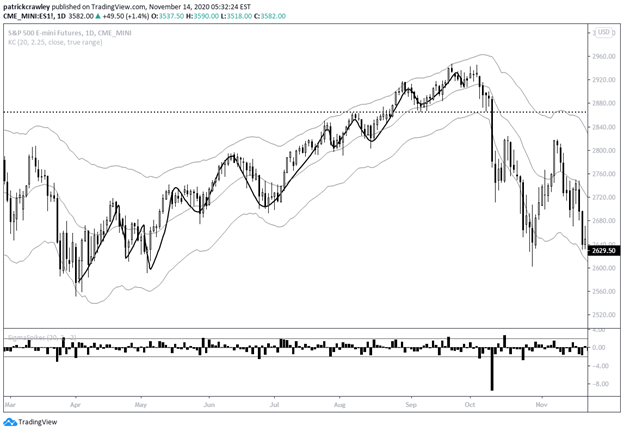 Following this simple framework would have allowed you to avoid much of the decline of the late 2018 market pullback.

Of course, due to slippage, you likely would have gotten a bad fill, but the market continued to decline precipitously following the initial first-day crash.

Trying to “buy the dip” when that dip breaks the longer-term market trend is a losing strategy.

Here’s an example which would have produced a favorable opportunity to “buy the dip.”

Broad Market – Use the VIX

When it comes to identifying potential turning points in the broad market indices like the S&P 500, we have several other tools in our toolbox.

While these markets are the most competitive, they’re also the most noisy with participants on different time frames and objectives, meaning the most “rational” price might not always be reflected. This presents an opportunity.

One tool that serves many S&P traders well is the VIX, which is the S&P 500 Volatility Index, also known as the “fear gauge” in financial media.

In a nutshell, the VIX measures how aggressively investors are hedging in the S&P 500 options market. Investors hedge when they think volatility is coming.

Predictably, investors typically do the most hedging when the damage is already done. Hence, extreme readings in the VIX can indicate market turning points, when the fear is so high that most sellers have sold.

Of course, the caveat here is that market conditions are relatively stable. In a true melt-down, “buying the dip” is a destructive strategy. In a whitepaper by Andrew Miller CFA, CFP, he touches on this very phenomenon.

He found that by simply using a VIX filter, he could significantly improve the profitability of a trend following strategy.

Below is a weekly chart of the VIX spanning a few years back. One of the most persistently occurring patterns is a blow-off top in the form of an inverted hammer candlestick indicating the end of the VIX spike.

Remember, the VIX and the S&P 500 are roughly inversely correlated, meaning that when the VIX rises, the S&P declines. 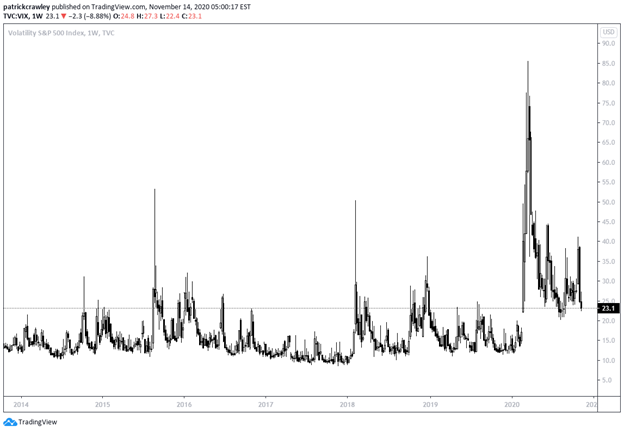 Most options expire worthless. And most option buyers don’t buy options outright for profit purposes, but instead to hedge an existing position. This is why the use of the put/call ratio is useful for identifying short-term sentiment extremes.

When too many are positioning on one side of the trade, the market typically reverses. Everyone who was going to sell, has basically already sold.

Below is a chart of the 10-day moving average of the CBOE Equity Put/Call Ratio spanning back a few years. Like the VIX, the chart resembles an ECG more than a stock chart. 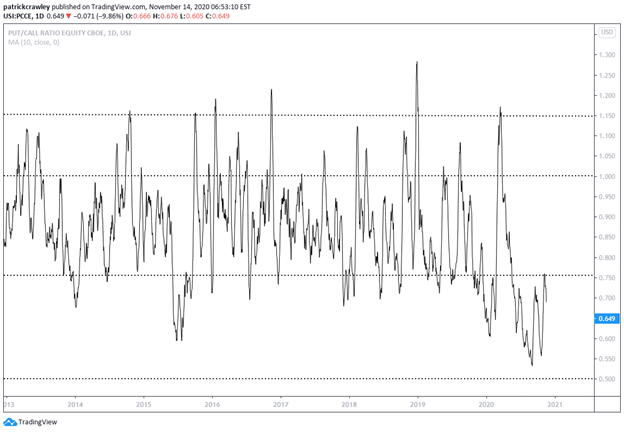 When the moving average is low, that indicates an extreme level of call buying and vice versa.

Larry Connors and one of his quant apprentices, Cesar Alvarez, are well-known for their work in short-term mean reversion trading, especially when it comes to the RSI indicator.

Before their work became prominent, most traders used a 14-period RSI, which lags price too much and typically leads to traders establishing their positions too late.

One of their major findings was how well the short-term RSI, particularly the 2-period RSI, is at forecasting short-term points of exhaustion in trending stocks.

Below is an example chart displaying the difference between the 2-period RSI and the 14-period RSI: 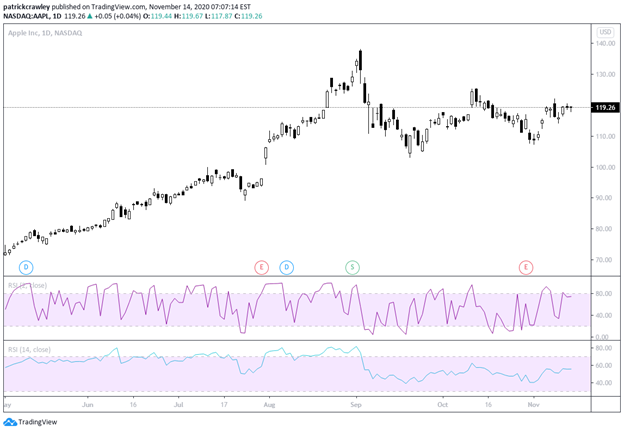 Capitalizing on their success in applying short-term RSIs, the Connors Research team developed their own derivation of the RSI: ConnorsRSI.

It’s essentially an RSI which takes into account the current trend measured by the number of recent consecutive up/down days, as well as the historical volatility of the stock.

It should serve as no surprise that this indicator yields even better trading results for buying the dip.

Here’s some of Alvarez’s data on the returns of ConnorsRSI buy and sell signals when holding for fives, from his analysis of the indicator: 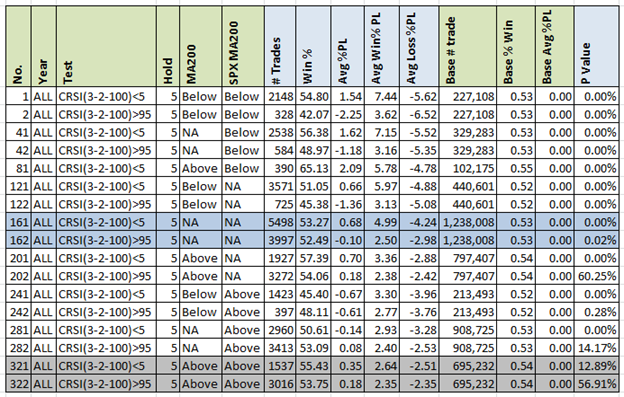 The indicator is supposed to be used on steadily trending stocks with relatively low volatility. The baseline recommended trading rules for Connors strategy are as follows:

Perhaps you can be profitable trading the above rules like a robot, but the real performance comes in when you use superior trend identification and price action analysis skills to cherry-pick the more favorable setups.

Here’s an example of what your chart might look like when trading this strategy on a steadily trending stock: 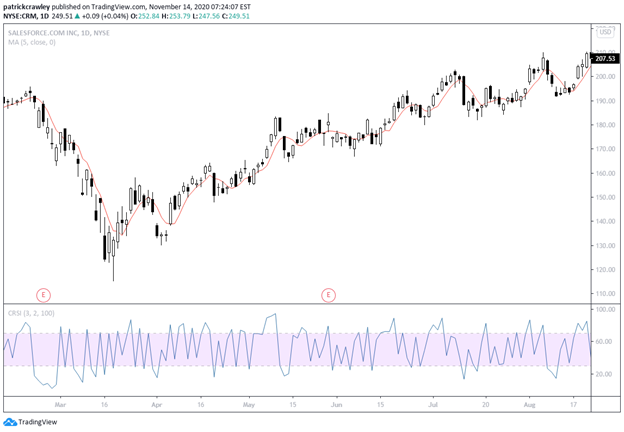 The phrase “buy the dip” has become a meme of sorts. As such, it’s mocked in the same way that “stocks never go down” is. However, it’s just a snappy way to describe a mean reversion trade.

Many of them show favorable backtests, but most don’t use stop losses and have very high maximum drawdown levels. The majority of traders can’t stomach holding onto the losses, and that might not be a bad thing.

If you plan to make your trading career through “buying the dip,” know that while it can be highly profitable, it’s one of the highest friction ways to trade successfully, especially for those who don’t have their mindset dialed in.