The Honest Company IPO is official after they filed to go public on April 9, 2021, seeking to raise $100 million in capital.

The company sells their products through their direct-to-consumer ecommerce website, as well as in major retailers like Amazon, Costco, and Target.

They have significant venture capital backing from firms like Fidelity Management and Research, Lightspeed Venture Partners, and L Catterton.

The company filed for an IPO last week and they’re currently planning to sell $100 million worth of their stock, which will trade under the ticker HNST.

Quick Rundown on The Honest Company

Alba started Honest in 2011 because she perceived a gap in the market: there were hardly any large companies selling baby products free of potentially harmful chemicals, so she found business partners in Christopher Gavigan, former CEO of Healthy Child Healthy World, LegalZoom founder Brian Lee, and a startup acceleration specialist, Sean Kane.

They opt to use Europe’s list of 1300 banned chemicals for household products to guide product development, rather than that of their domestic regulator, the US FDA, because of its comparatively short list of banned products.

The company’s primary products are diapers and baby wipes, accounting for 63% of revenues.

The company was prepping for an IPO in 2016 but never moved forward with it until now. They were in talks to be acquired by Unilever around the same time, but talks seem to have fallen through when Unilever opted to purchase Honest’s competitor, Seventh Generation.

Honest only just filed the first iteration of their S-1 prospectus so much of the details of the deal are still unknown and subject to change.

While they’ve placed a placeholder IPO value of $100 million, we’re still unaware of how much stock they intend to sell, or where it will be priced.

The company’s projections of their own market segment are substantial. Below is a chart from their prospectus which displays the estimated compounded annual growth rate (CAGR) of the “clean/natural” segment of household products.

Their main revenue driver, diapers and wipes, has the most substantial of forecasted growth, at 16% CAGR through 2025. 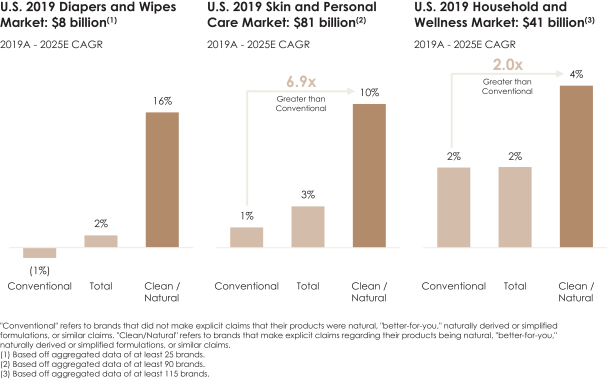 In terms of revenue, the company logged $300 million of revenue in 2020, compared to $235 million in 2019. Much of that growth might be attributable to the shortages created by coronavirus, however.

A look at the Amazon reviews around that time reports many first-time buyers only purchasing because they couldn’t find anything else.

Are The Diapers Any Good?

It’s easy to go “Excel Crazy” when it comes to evaluating a company, as Scott Fearon calls it.

However, when evaluating a simple business like this one, which sells consumer products that are easy to test and review, the best information can be gleaned simply from talking to customers. After all, a company can have the best metrics

I’m not a parent, so I can’t speak to personal use with their diapers and wipes, nor do I know anyone that uses this product. So, I did the next best thing I can do is look at YouTube and Amazon reviews.

Overall, people seem to love the fact that they make their diapers with mostly organic products, and that their price point is right around the middle of that product category. The reviews especially love the wide availability of different patterns.

One of the key things that pops out in the critical reviews is the lack of a wetness indicator, which is the part of the diaper that changes color when wet, basically telling you that your baby needs to be changed.

Another common complaint is that the diapers leak a lot, which I imagine is the worst hindrance a diaper can have. This might be due to the fact that they run small.

It might seem a little ridiculous to talk about diapers in what is ultimately an article about trading or investing in an IPO, but you can’t invest in consumer products companies without knowing their product and what their customers think.

In one of the reviews from Taylor Raine, she mentioned that she doesn’t see a huge reason to subscribe to Honest’s monthly delivery service, because Amazon has started doing the same thing since Honest started doing it.

Competitors to The Honest Company

Honest isn’t the only company making baby products with mostly organic materials. One of the biggest names in baby products, Pampers, has a line of eco-friendly and safe diapers called Pampers Pure.

It’s probably very tough to compete directly with Procter & Gamble, the owners of the Pampers brand.

Unliever also entered the space in 2016 by acquiring Burlington, Vermont-based Seventh Generation, another company that makes household products including diapers with a similar philosophy.

In terms of smaller competitors, there is also Babyganics and Andy Pandy.

Honest outlines this issue of high competition in their prospectus under their Risk Factor disclosures:

Even though two household product giants, Procter & Gamble and Unilever, are direct competitors of Honest, the giants have their issues.

In the eco-friendly and organic markets, there’s certainly a preference for smaller brands and brands that can make a personal connection with their customers. At the end of the day, customers know they can’t get in a lab and analyze the products themselves so there’s a large element of trust involved.

Alba and her Honest business partner Christopher Gavigan, have both cemented themselves as experts on natural living especially with regards to living with children.

We also can’t underestimate the value of Alba’s celebrity status. Americans love celebrities and are willing to pay a premium for their products.

As of writing, we’re in an extremely strong bull market, at least from the price action perspective. BofA Securities’ David Jones just reported that there were more inflows into equities in the last five months than over the last 12 years combined.

Looking to the iShares US Consumer Goods ETF (IYK), we it tracking and even outperforming SPY. Doesn’t look like a bad market for a consumer goods IPO. 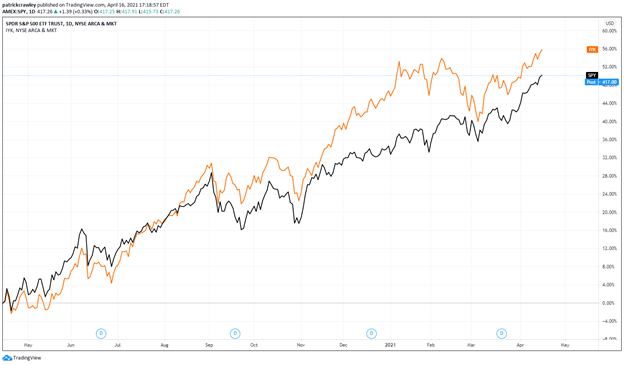 An investment into The Honest Company looks to be one of the few pure plays on the growing clean/natural segment of consumer goods.

With experienced operators, a strong celebrity presence, and strong brand, they could certainly be a big winner.

Competition from the consumer goods giants is a big issue, but they could be a potential acquisition target too.