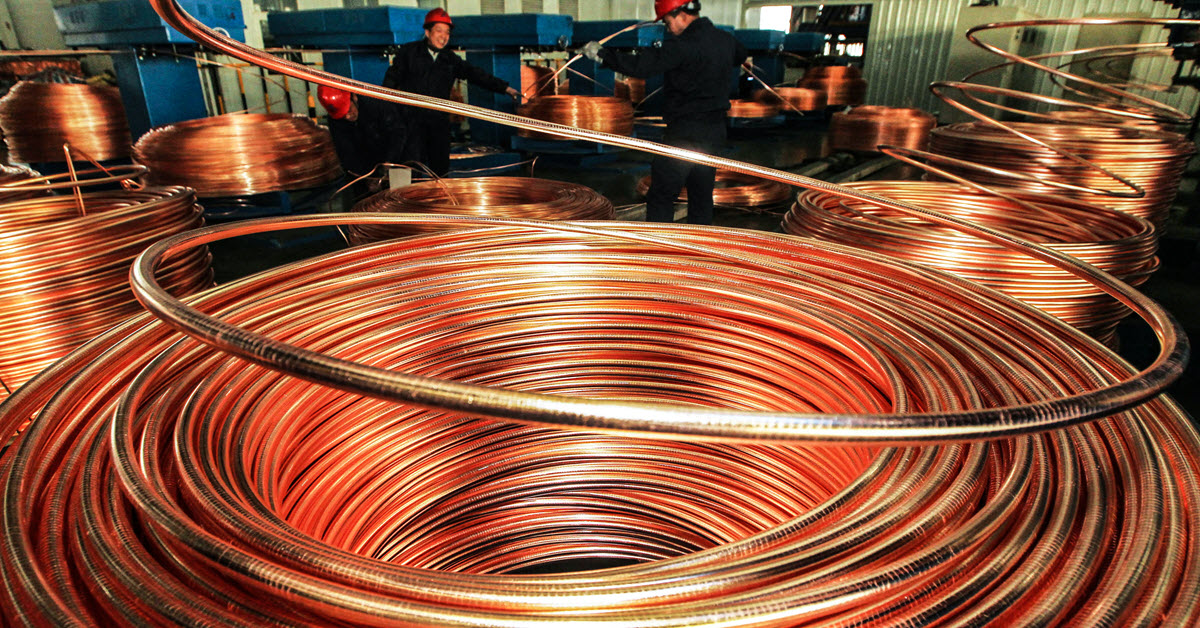 Copper futures in the December contract settled last Friday in New York at 3.0620 a pound while currently trading at 3.0370, down about 250 points on high volatility as prices are still hovering right near a 2 year high.

If you take a look at the daily chart, the uptrend line remains intact coupled with the fact that prices are trading above their 20 and 100-day moving average as this trend is strong to the upside even though prices have stalled out over the last couple of weeks.

I have been recommending a bullish position from around the 3.0140 level. If you took that trade, continue to place the stop loss under the 2 week low on a closing basis only at 2.9535 as an exit strategy chart structure is outstanding. For the bullish momentum to continue, prices have to break the September 1st high of 3.0945, in my opinion. I still believe the risk/reward is in your favor for a bullish position as this commodity at the current time is following the stock market, which has showed some high volatility to the downside over the last several days, keeping a lid on prices.

Silver futures in the December contract settled last Friday in New York at 26.71 an ounce while currently trading at 26.92, up slightly for the trading week as prices continue their sideways trading action.

I had been recommending a bullish position over the last several months from around the 18.61 level, getting stopped out around 26.30. I am now waiting for another bullish trend to develop, possibly happening in the next couple of weeks.

Silver prices are now trading below their 20-day but still above their 100-day moving average as the trend is mixed to higher. I think we are just consolidating the massive run-up in price that we witnessed over the last 6 weeks, which is not surprising as this could last even longer, so be patient as we will be involved soon.

The volatility in silver remains extremely high as the entire precious metals sector has taken a breather while my only recommendation presently is a bullish copper trade, which can move in opposite directions of silver and gold.

Platinum futures in the October contract settled last Friday in New York at 898 an ounce while currently trading at 937, up nearly $40 for the trading week as prices are right at a 1 week high.

I am not involved as I’m keeping a close eye on this market to the upside. I think the downside is very limited, and if you are a long term investor, I would be buying platinum at these historically cheap prices while holding and having a long-term horizon. Prices are trading right at their 20-day and still above their 100-day moving average as I will wait for the chart structure to improve, which will take another 7/10 trading sessions as I do not think a top has been formed. The volatility remains high. That situation will not change anytime soon as the U.S. dollar continues to hover near a 2 year low, which is a fundamental bullish factor towards higher prices.

If the United States can come up with a vaccine for the Coronavirus, that would be very bullish towards platinum and all asset classes, which could happen in November. I still believe there could be significant room to run to the upside.

Natural gas futures in the October contract settled last Friday in New York at 2.58 while currently trading at 2.28, down nearly 30 points for the week, hitting a 4 week low. Fundamentally speaking, the outlook for cooler U.S. temperatures along with a bigger-than-expected increase in weekly EIA nat-gas inventories.

The Commodity Weather Group on Thursday said there are no major weather extremes indicated over the medium-term in the U.S. and that temperatures will be mostly seasonal in the eastern half of the U.S. from Sep 15-24, which will curb gas demand from utility providers to power air conditioners.

I’m not involved as the chart structure is terrible; therefore, the risk/reward is not in your favor. However, I do believe a long-term bottom is in places as I will be looking at a bullish position, especially if prices can break down to the 2.00 level, so keep a close eye on this as there could be a possible counter-trend trade in the coming days ahead. Natural gas prices are now trading below their 20-day but still above their 100-day moving average. The volatility at the present time is average as, historically speaking, this is one of the most volatile commodities, especially heading into the winter months as I think the downside is limited.

Soybean futures in the November contract, which is considered the new crop and will be harvested in October, settled last Friday in Chicago at 9.68 a bushel while currently trading at 9.83, continuing it’s bullish momentum as prices are right near a 27-month high.

Last Friday in Chicago, soybean prices settled at 9.68 a bushel while currently trading at 9.95, up about $0.27 for the week, reacting positively off of the WASDE crop report. The report stated that production numbers are around 51.9 bushels per acre, which was slightly above estimates with final production numbers around 4,313 billion bushels. Last month’s estimate was 4,425, as the cut was due to hot and dry weather in August.

I have been recommending a bullish position over the last month or so from the 9.14 level. If you took that trade, continue to place the stop loss under the 10-day low, which now stands at 9.42 as an exit strategy. However, the chart structure will improve daily starting next week; therefore, the monetary risk will be reduced significantly. At the current time, I also have a bullish soybean meal recommendation, which continues to hit new highs monthly as the entire complex remains strong, so stay long as I will be looking at adding more contracts, possibly next week.

Soybean meal futures in the December contract settled last Friday in Chicago at 317.0 a ton while currently trading at 323.0, up slightly for the trading week as prices are still knocking on the door of a 10 month high following the coattails of soybeans and soybean oil.

Soybean meal price reacted pretty neutrally off the crop report, which was released as there are major concerns about certain pockets in the Midwest pushing prices higher as we experience a harvest rally.

I have been recommending a bullish position from the 299 level. If you took that trade, continue to place the stop loss under the 10-day low standing at 307 as an exit strategy. However, the chart structure will improve in 4 trading sessions; therefore, the monetary risk will be reduced. The next major level of resistance is at the 335 area as there is significant room to run as fundamentally speaking, this market has turned to the upside as demand has certainly come back from China coupled with the fact of shrinking carryover levels, so stay long as the top has not been formed.

Hog prices are trading far above their 20 and 100-day moving average as this trend has been remarkable to the upside. If you look at the daily chart as I have discussed in previous blogs, a head and shoulders bottom chart pattern developed. That can predict higher prices is that is precisely what occurred.

Volatility is extremely high as we are now witnessing limit up trading sessions, so if you are involved, respect this market while making sure that you risk 2% your account balance on any given trade. I had been recommending a bullish position from around the 50.75 level over the last month as I exited around the 64.30 area today as I think the price gaps will be filled next week as this market has skyrocketed to the upside. Fundamentally speaking, Germany’s Ministry of Food and Agriculture confirmed the suspected case of ASF in a wild boar as officials have quarantined the area in an effort to contain the possible spread as they search for more cases coupled with the fact that South Korea announced an import ban from German sourced pork beginning September 10th.

Cattle futures in the October contract is currently trading at 105.17, up 7 points this Friday afternoon in Chicago after settling last week at 104.45 up slightly for the week still stuck in a tight 2 week consolidation pattern.

I am not involved as I’m keeping a close eye on a bottoming out pattern as I’m looking at a bullish position down the road as I think the downside is very limited. I had been recommending a bullish hog trade over the last several weeks while exiting today right near the limit up level as that market has exploded over the last several weeks. Still, it’s had minimal impact on cattle. However, I think down the road, it will start to push prices higher. Cattle prices are trading below their 20-day, but still above their 100-day moving average as the trend is mixed as I’m advising clients to avoid and be patient and wait for a breakout to occur, which still could take a couple of more weeks.

The U.S. dollar is still hovering right near a 2 year low coupled with the fact that the Federal Reserve stimulus packages worth trillions of dollars flooding the market, which should push up the commodity markets across the board into secular bullish trends just like what happened starting in September of 2010.

If you are looking for a futures broker feel free to contact Michael Seery at 630-408-3325 and he will be more than happy to help you with your trading or visit www.seeryfutures.com

There is a substantial risk of loss in futures, futures option and forex trading. Furthermore, Seery Futures is not responsible for the accuracy of the information contained on linked sites. Trading futures and options is Not appropriate for every investor. My opinion in this blog are for general information use only and are not intended as an offer or solicitation with respect to the purchase or sale of any futures or option contracts.