When there is something turbulent happening in the world, investors buy the dollar as a safe haven. However, when there is uncertainty in the United States itself, as we have been observing recently with the situation around the 2020 election, money shifts to a universal shelter to precious metals such as gold and silver.

One should be careful these days, as we need to remember the old trading wisdom, which says buy rumors, sell facts. The Results of this election finally came out, catching traders out of access to the market on the weekend. This could be a good lesson to keep away during such a major event such as this US presidential election as volatility spikes dramatically as well as investors’ emotions, and only a deep “pocket” could survive then.

Gold was up and down with huge moves in both directions last week. It finished the period on the upbeat, as investors were puzzled with uncertainty over election results. The move-up was strong as the price quickly broke $1900 and gained $84 from $1876 to $1960 at the top. Some profit-taking then followed as the week ended lower at $1952.

The market closed in the dark, and the results were out later. I guess the opposite price action could happen then on the market, as it tends to “sell facts.” It goes in line with the map that I shared with you last month. We got the move down and then the move up to complete the counter-trend consolidation, which links the second and third legs down. The latter could start soon, or maybe even before this update will be posted. The round number $1800 mark could be tagged then.

They say a picture’s worth a thousand words. For that reason, I highlighted the similar consolidation that emerged a year ago for you in red, and it had three visible legs down. I projected the same scenario on the current consolidation for clear visualization.

From the seasonal point of view, this extension of the current consolidation looks natural as the takeoff run before the possible traditional Santa Claus Rally. 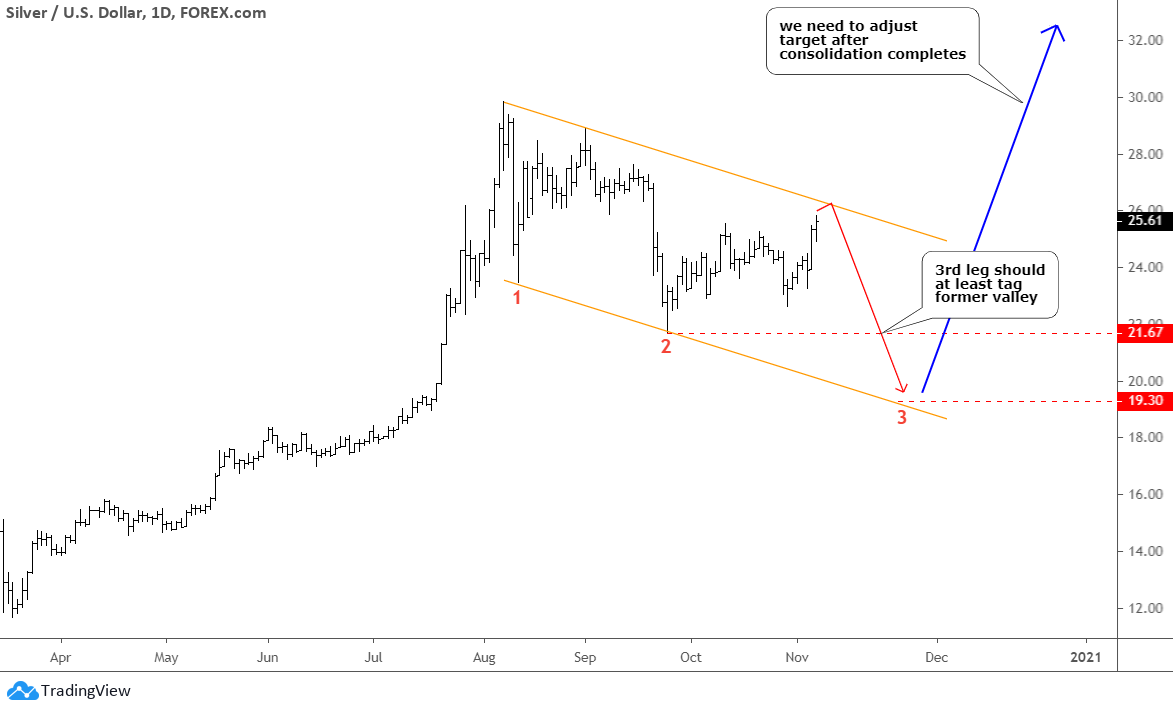 Silver shows the same behavior as gold, but its chart structure is clearer as we are still in the same orange downtrend channel. The zigzag move has emerged as it was mapped previously, although the last move up was slightly higher, making an up-sloping counter-trend consolidation. It almost touched the upside of the channel last Friday.

The expected “sell facts” related move down is expected here either, and the downside of the channel could be touched then in the $19.30 area. The third leg down should at least retest the former valley of $21.67.

I cut the excess from the chart to focus on the move up and the current consolidation, which could hit the 50-61.8% Fibonacci retracement levels between $20.8 and $18.6. This would create an effect of a compressed spring, which then could catapult the price much higher. That is why I removed the old target to see if we will dip one more time to find the new point of growth and the new target accordingly.