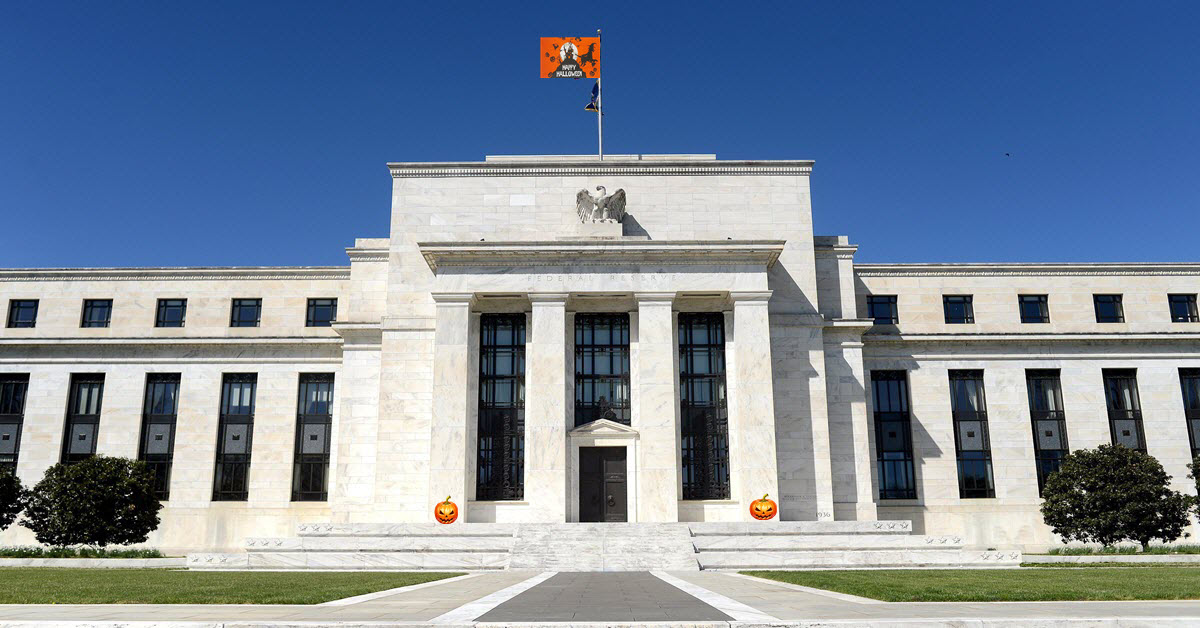 Want to guess who Federal Reserve Chairman Jerome Powell is going as for Halloween? Based on his most recent speech on the economy, it’s got to be the Grim Reaper.

Even as reports continue to show the economy recovering pretty quickly following the government-mandated shutdown of the spring and summer – which several of his Federal Reserve colleagues have cited – Powell continues to paint the direst picture of the American economy. However, this time, he has gone beyond the bounds of the Fed’s independence, publicly politicking for a new federal fiscal stimulus package. If one doesn’t arrive soon, he warned, it will be “tragic” and “lead to a weak recovery, creating unnecessary hardship.”

“The recovery will be stronger and move faster if monetary policy and fiscal policy continue to work side by side to provide support to the economy until it is clearly out of the woods,” Powell said in a speech last week to the National Association for Business Economics.

I had been under the impression that the Fed was supposed to be “independent” of the government, or at least that’s what we were told repeatedly when President Trump went off on Powell for not doing what he wanted. However, it seems to be ok if Powell cedes that independence voluntarily and takes sides on a political debate.

This isn’t so much an example of charter creep, which just about every government agency and leader does, as much as a charter leap, with the Fed not only taking over more and more of the economy and financial markets but publicly lobbying for government action to make it so.

As dangerous as that is, Powell’s rationalization for doing so is not built on a solid foundation. Despite the fact that the Fed has recently raised its outlook for economic and jobs growth, Powell is still claiming that the whole nascent recovery is built on sand, which could collapse without further intervention from the government on the fiscal side and the Fed on the monetary side.

“The expansion is still far from complete,” he said. “At this early stage, I would argue that the risks of policy intervention are still asymmetric (i.e., could go either way). Too little support would lead to a weak recovery, creating unnecessary hardship.”

That may or may not be true, but right now, the economy has not collapsed even though a lot of the assistance passed earlier this year by Congress, such as individual stimulus checks and bonus unemployment payments, has already been spent or expired. True, some indicators have slowed, but others have continued to rebound without additional help. Some analysts argue the necessity of another stimulus package.

Take the jobs market. Last month the unemployment rate edged down again to 7.9%, down sharply from April’s peak of 14.7%. The economy created another 661,000 more jobs, less than expected, but more than half of the 22 million jobs lost in March and April have since been recovered.

The Institute for Supply Management’s manufacturing index rose for the fifth consecutive month in September to 55.4 while its services index, which tracks most of the economy, rose nearly a point to 57.8. Both are well in expansion territory. The Conference Board’s Consumer Confidence Index jumped 15.5 points to 101.8, its biggest one-month increase since 2003.

At least some Fed officials have taken notice of those numbers. John Williams, the president of the New York Fed and vice chairman of the Fed’s monetary policy committee, said “the recovery has actually been stronger, more robust than many were expecting” and that he is “optimistic that we’ll be able to continue to see a pretty strong economic recovery for the rest of this year, into next year.” James Bullard, the St. Louis Fed president, enthused that it wouldn’t be “out of the realm of possibility” that the economy may be back to near full recovery as early as the end of this year.

The best that Powell could find to say is that “while the combined effects of fiscal and monetary policy have aided the solid recovery of the labor market so far, there is still a long way to go.” Fair enough. But he leavened that with predictions of more dire consequences for failing to act. “A long period of unnecessarily slow progress could continue to exacerbate existing disparities in our economy,” he said. “That would be tragic.”

Maybe Powell should take a ride to his local Walmart or Costco and see the parking lot jammed with cars, just like it was before March, to see what rotten shape the economy is in.
So why is Powell so pessimistic?

Ever since the 2008 financial crisis, the Fed has injected itself more and more into American life, often for very compelling reasons. But that’s apparently not enough for Powell, who sees an opening to make the Fed’s position permanent, where the government just keeps spending zillions of dollars that it doesn’t have on never-ending crises, raining money everywhere, while the Fed picks up the tab.

Maybe Santa Claus would be a more appropriate costume.