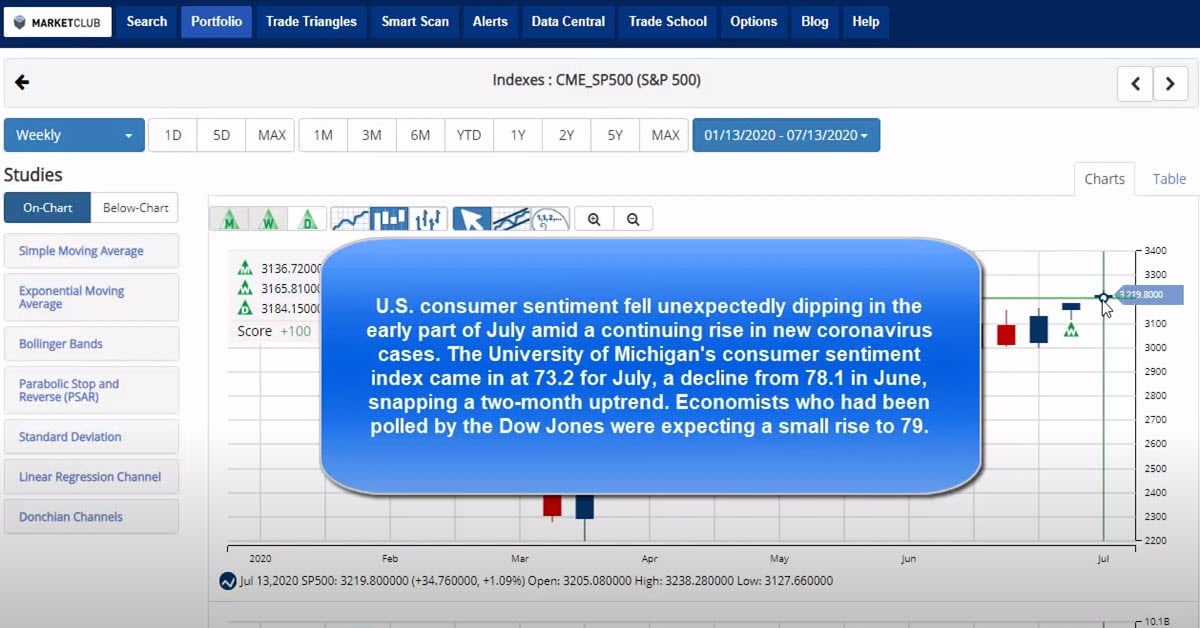 U.S. consumer sentiment fell unexpectedly dipping in the early part of July amid a continuing rise in new coronavirus cases. The University of Michigan’s consumer sentiment index came in at 73.2 for July, a decline from 78.1 in June, snapping a two-month uptrend. Economists who had been polled by the Dow Jones were expecting a small rise to 79.

Falling consumer sentiment shouldn’t be a shock with coronavirus cases spiking in several states across the country, including massive spikes in the stares of Florida, Texas, Arizona, and California. The stock market seems to agree with today’s muted moves to end the week. As we head into the Friday close, the major indexes are mixed on the day matching their theme for the week.

The DOW will end the week with a positive gain of roughly +2%, which is a bit higher than the S&P 500’s gain of +1%. However, the NASDAQ will post a weekly loss of approximately -1% as the tech sector was hit hard to end the week, most notably with Netflix losing over -6% on the day and -10 for the week.

The streaming media giant missed analyst expectations on its second-quarter earnings. It reported EPS of $1.59 versus $1.81 expected per Refinitiv. The company also provided weak subscriber growth guidance for the third quarter, saying, “growth is slowing as consumers get through the initial shock of COVID-19 and social restrictions.” Meanwhile, Netflix announced its Chief Content Officer Ted Sarandos will become co-CEO alongside current CEO Reed Hastings.

The U.S. dollar and Bitcoin will end the week with weekly losses standing at -6% and -1% respectably sitting in a sidelines mode with mixed Trade Triangles.

Gold and crude oil turned their weeks around after it appeared that they would post weekly losses to post weekly gains of +.55% and +.44%. But both remain in a short-term sidelines position with red daily Trade Triangles.