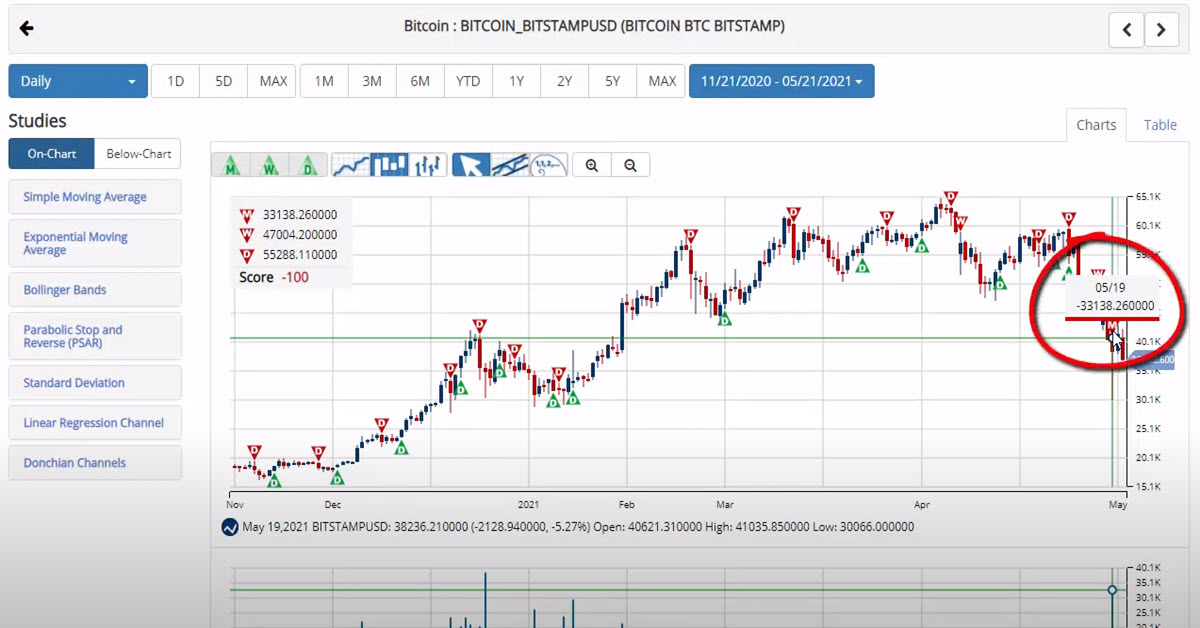 Bitcoin and the cryptocurrency market overall are heading into the weekend down after a volatile week. Bitcoin will end the week down roughly -23% as I write this article after China released a statement stating that it is necessary to “crackdown on Bitcoin mining and trading behavior, and resolutely prevent the transmission of individual risks to the social field.”

China’s tough talk comes just a day after U.S. officials pledged to get tough on those using Bitcoin to conduct “illegal activity broadly including tax evasion.” The Treasury Department said it would require reporting on cryptocurrency transfers of more than $10,000, just as with cash.

Bitcoin’s price slid more than -10% as news of the Chinese statement circulated, part of a broader plunge that has seen the cryptocurrency tumble more than -40% from its peak of 59,603.00. This sell-off has affected the entire cryptocurrency market, with the Eretheum and Litecoin losing -35% and -41% respectively.

On the stock market front, it’s been a quiet week for the three major indexes, so much so that the NASDAQ is trying to end its four-week losing streak with a small gain of roughly +.39%. The S&P 500 and DOW will check in with weekly losses of roughly -.4% and -.5%.

As volatility has ramped up, gold has peaked its head out of the closet. It looks to gain about +1.6% on the week, trading above the $1,8064 level issuing a new green monthly Trade Triangle pushing the Chart Analysis Score to +90, and entering a long-term uptrend.

Crude oil and the dollar didn’t fare well, losing -5.2% and -.21% on the week. That weekly loss for the dollar was enough to trigger a new red monthly Trade Triangle pushing the Chart Analysis Score to -100, entering a long-term downtrend.