Apple (AAPL) just announced that the company is performing a 4-for-1 stock split to occur at market close on August 24th, 2020.

This means that Apple shareholders will receive four shares for each share they own.

For example, suppose the stock split were to happen today when the stock is trading at about $430.

For every share of Apple, you held prior to the split, you’d receive four shares in exchange, each valued at $107.50.

What is a Stock Split?

A stock split is typically confusing to new traders and investors.

The idea that the price of a stock will either be multiplied or divided by a specified multiple doesn’t make much sense to newbies, but it’s quite simple when explained plainly.

A stock split is when the shares outstanding of a company are multiplied by a specified multiplier. As a result, each share is worth proportionately more or less, depending on the multiplier.

For instance, let’s create a hypothetical scenario involving Company XYZ. The company has 1 million shares outstanding, its market cap is $100 million, and the share price is $100.

Suppose the company announces a 2-for-1 stock split. The company will now have 2 million shares outstanding, still have a market cap of $100 million, and the share price will now be $50.

A shareholder who owned 100 shares before the split would now own 200 shares at $50 per share. Each shareholder’s ownership percentage of the company would remain unchanged.

Here’s a table from Investopedia to help you visualize it: 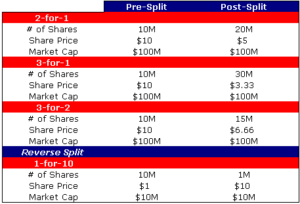 How Did Apple React to its Last Split?

The last time Apple split its stock was on June 9th, 2014. The split was 7-for-1, meaning a shareholder would receive six additional shares for every share they own.

On the day of the split, the stock experienced about average volume and volatility when using the 20-day moving average of volume and Average True Range, respectively.

The stock trended strongly in the lead up to the actual event, so it may have been a “buy the news, sell the rumor” situation, especially considering the considerable pullback following the split. 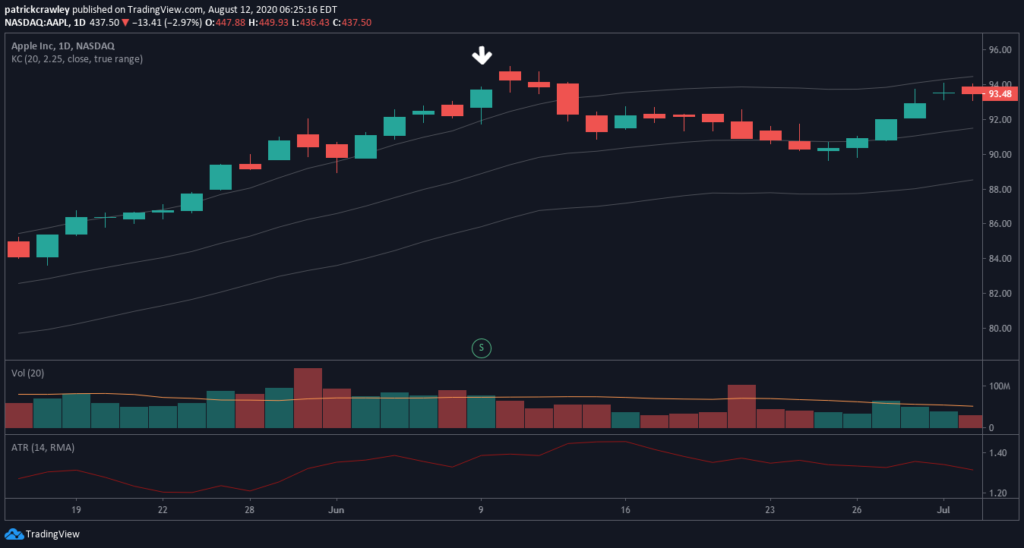 The Dow is price-weighted, which means the weighting of Dow components is determined by stock price.

The S&P 500 and NASDAQ 100 use market capitalization to weigh index components. As a company grows its value, it gets more weight in the index.

As you may know, share prices mean very little in a vacuum. Any company can make its share higher by enacting a reverse stock split, which would reduce the shares outstanding and increase share price.

So Apple’s upcoming stock split means that Apple will significantly reduce its weighting in the Dow. And considering Apple is one of the market’s leading stocks, this is likely to lead to the Dow lagging the S&P 500 and NASDAQ 100 even more.

The index is already light on tech stocks, which has been the strongest sector for most of the current bull market and is only going to get lighter post-split.

Here’s the Dow components sorted by their index weight, courtesy of SlickCharts. As you can see, Apple is decidedly the heaviest weighted stock in the index, accounting for over 11% of the Dow.

Post-split, the company’s weight will be about in line with that of Nike (ANKE), putting it in the middle of the pack. 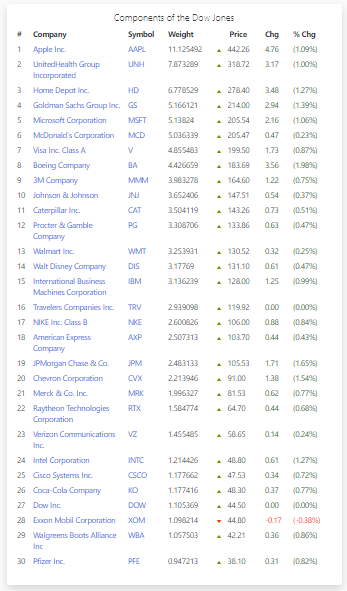 Here’s a chart displaying the performance of the three major US indices; the Dow Jones Industrial Average (red), S&P 500 (white), and NASDAQ 100 (green) since the February 2020 crash. 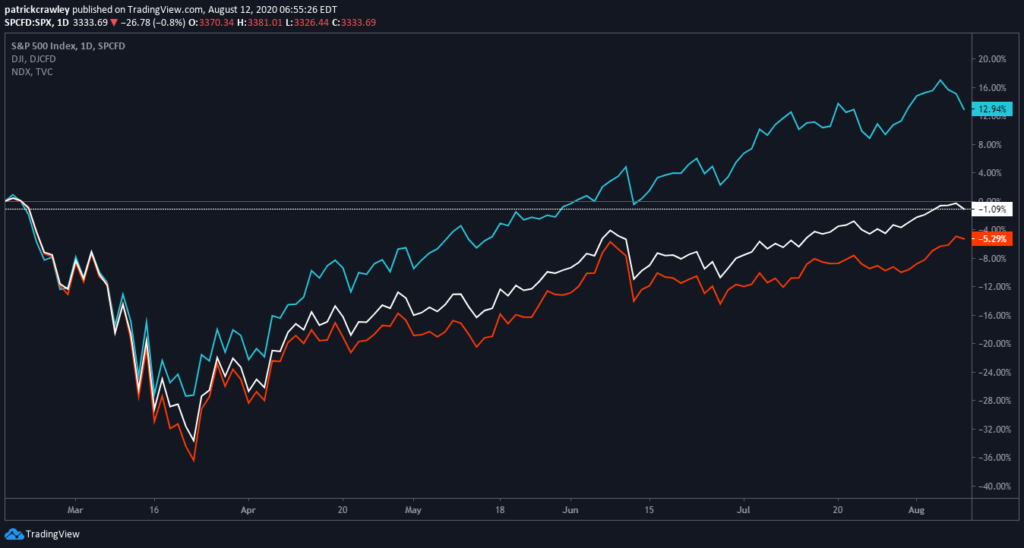 It’s easy to see why investors in Dow Jones index funds might be worried about this split.

There’s a wealth of academic research that studies the market reactions to the announcement of stock splits and the events themselves.

The overall sentiment of this research is that stock splits typically result in abnormally positive returns and decreased liquidity.

While each study has unique findings, the overarching reason given for excess returns is that stock splits are “signaling events.”

Signaling events are actions by company executives, which hints about the company’s future performance.

The announcement of a stock split signals to the market that management is anticipating higher future prices, hinting that the insider information is favorable.

These are management actions that indicate to the market that insider expectations will be favorable.

A 1996 study in the Journal of Financial and Quantitative Analysis found significant excess returns of 7.93% for the first year post-split.

On a more granular level, one study, in particular, found that the activity of uninformed investors spiked shortly after a stock split. These investors tend to be more price-agnostic and use market orders much heavier.

Academics cite several other reasons why a company might want to perform a stock split. Among them are increased activity from smaller investors, increased liquidity, and increased promotion from market makers (this one is dated).

However, all of these have been debunked to some degree in opposing studies. The only common thread among almost all of the studies has been the signaling effect.

On the surface, stock splits look like purely cosmetic effects that should have negligible impact on prices. Upon diving into the data, however, you’re presented with a different picture.

Instead of merely serving as a stock price ‘reset,’ splits serve as a signal to the market that performance will be favorable in the future. And these signals, by some accounts, have an edge.

Apple’s announcement comes as the S&P 500 is approaching its pre-crash highs, and perhaps it’s post-split performance will serve as a microcosm for the entire market.