Macroeconomic indicators give you a big picture on the health of the economy, but why is that important and how can you use them?

Below we’ll look at some peculiar macroeconomic indicators in different industries that help gauge market strengths and weaknesses.

The Texas Ratio is a quick and dirty accounting ratio used to identify “zombie banks.”

The indicator was developed by Gerard Cassidy of RBC Capital Markets when analyzing Texas banks.

The ratio compares a bank’s non-performing assets (loans that are 90 days past due) and owned real estate to the bank’s tangible common equity (meaning no goodwill or other intangible assets) and loan loss reserves (the amount the bank assumes to lose on their loans).

This ratio gives a good sense of how well or poorly a bank’s portfolio of loans are performing. Conventional wisdom says that over 100% readings are bad news, indicating a high likelihood of solvency.

The Wall Street Journal’s Simon Constable and Robert E. Wright called this the Texas “Zombie Bank” Ratio because those with high Texas Ratios are “undead.” They’re not solvent enough to write new loans and not insolvent sufficient to die or get acquired.

Where to Find Texas Ratio Data

For whatever reason, this indicator never really caught on, which is weird because the finance world typically loves these quick and dirty accounting ratios like the current ratio, for example.

As such, you’re unlikely to find Texas Ratio statistics on mainstream financial data aggregators like Yahoo Finance. There are some sites, like BankRegData, which publishes lots of data on bank financials.

Unlike most other financial sites that provide metrics, BankRegData provides some historical data, too, allowing you to view where things are trending.

You’d probably be surprised to find that the broad Texas Ratio of all the banks they follow has hardly ticked up since the global lockdowns began in March 2020:

How To Use the Texas Ratio

The Texas ratio is best used as a screening metric to search for banks that will be potentially insolvent in the future. It’s like the current ratio. On its own, it paints a very crude picture.

But when part of a larger strategy, it serves as a shortcut to getting a shortlist of shoddy banks to analyze.

The travel industry uses RevPAR to gauge how hotels and other short-term rental services are performing. The calculation of the metric is simple, divide the total monthly (or period) rental revenue by the number of occupied rooms.

The STR, an authority on RevPAR data, published the below infographic in their What is RevPAR blog post: 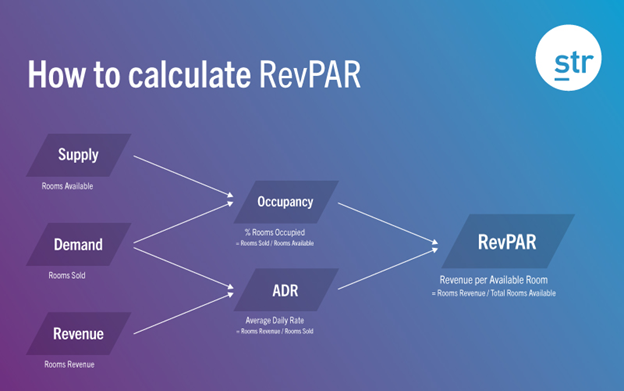 While you might assume this indicator is only relevant for comparing different travel industry rental properties to each other, many global macro investors use it to estimate if overall economic activity is advancing or declining.

Discretionary travel and economic growth are correlated, so when industry-wide RevPAR is growing, the economy is probably growing, or so the theory goes.

The advantage of revPAR is that it’s a leading indicator. Growth in RevPAR might suggest economic expansion or contraction before GDP or a change in interest rates might.

Thomas Claugus explained to Jack Schwager in Hedge Fund Market Wizards why his fund was heavily long US stocks in 2011 despite the seemingly bleak economic backdrop.

RevPAR was among the leading indicators he utilized to create what was a highly contrarian view at the time:

“The net exposure is primarily determined by the mean reversion model, but I don’t think the economy is as bad as the media is portraying it. We track a number of basic indicators to get a feel for the real economy. For example, rail traffic is up 2 percent for the year, and truck traffic is up 4 percent, which are not figures indicative of a contraction. Load factors on airlines are pretty good as well. RevPAR [revenue per available room] for hotels is up 7 percent. These are basic indicators you can look at that tell you the economy is just not that bad. Although we still have to work through some of the housing bubble excess, I don’t expect construction and housing starts to fall much from here because they are already so low they have almost nowhere to go but up.”

How To Use RevPAR

Most use revPAR as a travel industry metric to measure the efficiency of one property against another.

However, it has broad application as a macro indicator. Because travel spending is one of the most distinctly discretionary purchases consumers make, it provides excellent consumer confidence insight.

If people are traveling, they’re probably feeling optimistic about the economy and think they have the money to justify traveling.

This is where most Americans go to search for new homes or apartments. As a result, they’ve amassed a bundle of useful data, which they make available to individuals for free.

The Zillow Home Value Index provides a range of analytics nationwide, but also in specific regions.

We want to compare New York City and White Plains’ performance, which is a secondary city right outside of NYC with significantly lower population density.

As you can see, the pandemic-driven migrations outside of population centers like NYC have yet to appear in Zillow’s data.

This shouldn’t come as a huge surprise, given the fact that there’s a significant lag in real estate pricing because of how long transactions take.

Because of this lag, it’s better to observe real estate leading indicators like Median Days on Market, Inventory, and Share of Listings With a Price Cut.

These types of metrics indicate when a market is in trouble well before you see it in price changes.

The only drawback is that Zillow doesn’t offer these more granular data points on their website, but instead as a downloadable CSV file.

Granular real estate statistics like those provided by Zillow weren’t available to the everyday investor in the run-up to the Great Financial Crisis.

Perhaps in the age of social media and quantitative data analysis, many more would have been shouting from the rooftops about the problems today.

So much data is produced every second, making indicators like the macroeconomic indicators more accurate than ever.

It’s astonishing the insights that we have today that we didn’t have just ten years ago due to increased computing power and the widespread availability of no-code analytics platforms.

We have to assume that most of this data is being used to make money in the stock market.

From what we know, satellite insights, credit card transactions, social media sentiment, and news-reading bots have all been readily available to the hedge fund world for several years.

With more alternative data products coming to market each day, we can only imagine what’s next.